Trump became the first sitting US president to set foot in North Korea on Sunday when he met Kim in the Demilitarized Zone (DMZ) between the two Koreas and agreed to resume stalled nuclear talks. 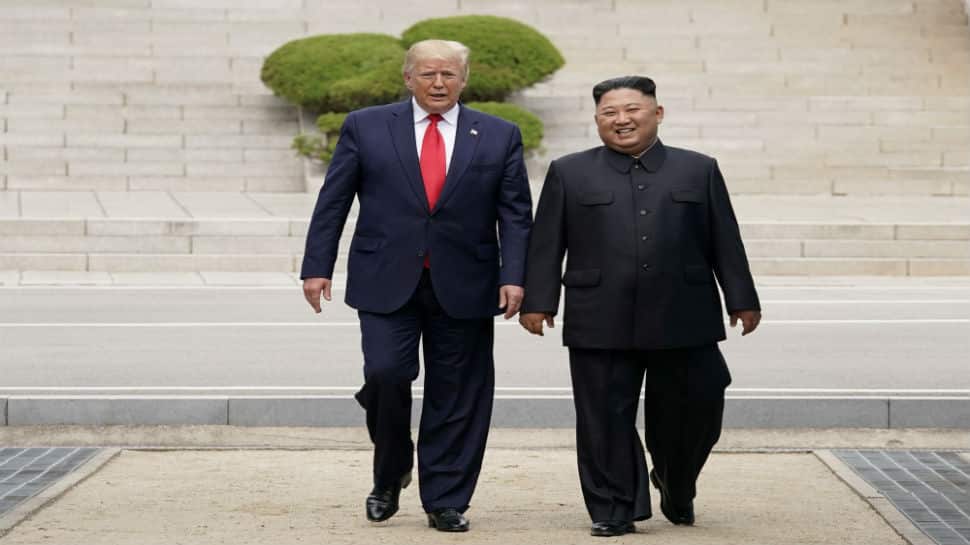 SEOUL: North Korean leader Kim Jong Un and US President Donald Trump agreed at their meeting on Sunday to push forward dialogue for making a new breakthrough in the denuclearisation of the Korean peninsula, North Korean state media said on Monday.

Trump became the first sitting US president to set foot in North Korea on Sunday when he met Kim in the Demilitarized Zone (DMZ) between the two Koreas and agreed to resume stalled nuclear talks.

"The top leaders of the two countries agreed to keep in close touch in the future, too, and resume and push forward productive dialogues for making a new breakthrough in the denuclearisation of the Korean peninsula and in the bilateral relations," KCNA news agency said.

The meeting, initiated by a tweet by Trump that Kim said took him by surprise, displayed the rapport between the two, but analysts said they were no closer to narrowing the gap between their positions since they walked away from their summit in February in Vietnam.

Trump said on Twitter on Monday he had a "great meeting" with Kim and he looked "forward to seeing him again soon."

Trump said US and North Korean negotiators would be meeting "to work on some solutions to very long-term and persistent problems."

"No rush, but I am sure we will ultimately get there!" he said.

US Secretary of State Mike Pompeo told reporters shortly before departing South Korea that a new round of talks would likely happen "sometime in July ... probably in the next two or three weeks" and North Korea`s negotiators would be foreign ministry diplomats.

In a photo released by KCNA on Monday, North Korean Foreign Minister Ri Yong Ho and Pompeo are shown sitting next to Kim and Trump respectively in Freedom House, the building in which the two leaders had their one-on-one talks.

KCNA said that during the chat between Trump and Kim, the two leaders explained "issues of easing tensions on the Korean peninsula," "issues of mutual concern and interest which become a stumbling block in solving those issues," and "voiced full understanding and sympathy."

Kim said it was the good personal relationship he had with Trump that made such a dramatic meeting possible at just one day`s notice and that the relationship with Trump would continue to produce good results, according to KCNA.

The two leaders` "bold, brave decision" that led to the historic meeting "created unprecedented trust between the two countries" that had been tangled in deeply rooted animosity, KCNA said.

UN Secretary-General Antonio Guterres welcomed the meeting between Trump and Kim and "fully supports the continued efforts of the parties to establish new relations towards sustainable peace, security and complete and verifiable denuclearisation of the Korean Peninsula", U.N. spokesman Stephane Dujarric said in a statement.

China also welcomed the meeting, with a foreign ministry spokesman describing it as "constructive and achieving positive results".

But problems could lie ahead.

"The fact that the nuclear talks have jump-started is very encouraging, but that doesn`t mean that the two sides have already adjusted their positions and set the conditions for successful working-level negotiations," said Kim Hyun-wook, a professor at the Korea National Diplomatic Academy.

After more than a year of talks, the two sides have yet to agree a common definition of denuclearisation, which North Korea has taken to include the U.S. nuclear umbrella protecting Japan and South Korea, while Washington has demanded that Pyongyang give up its nuclear weapons unilaterally.

Trump`s national security adviser, John Bolton, on Monday, rejected a New York Times report that said an idea was taking shape in the Trump administration to seek to negotiate a nuclear freeze by North Korea, rather than its complete denuclearisation, thereby tacitly accepting it as a nuclear state.

"I read this NYT story with curiosity," Bolton said in a tweet. "Neither the (National Security Council) staff nor I have discussed or heard of any desire to `settle for a nuclear freeze by NK.` This was a reprehensible attempt by someone to box in the President. There should be consequences."

A spokeswoman for the US State Department also dismissed the report.

"We are not preparing any new proposals currently," she said. "Our goal remains the final, fully verified denuclearisation of North Korea."

On Monday, the leading Democratic candidate Joe Biden issued a statement accusing Trump of being "more concerned with a photo op for himself than getting results for the American people".

Biden said that after three "made-for-TV summits," North Korea had yet to make a concrete commitment, while it had continued to produce fissile material and was no longer an isolated pariah.