Buttigieg, the moderate 38-year-old former mayor of South Bend, Indiana, edged out progressive US Senator Bernie Sanders by 26.2% to 26.1% of state-delegate equivalents. 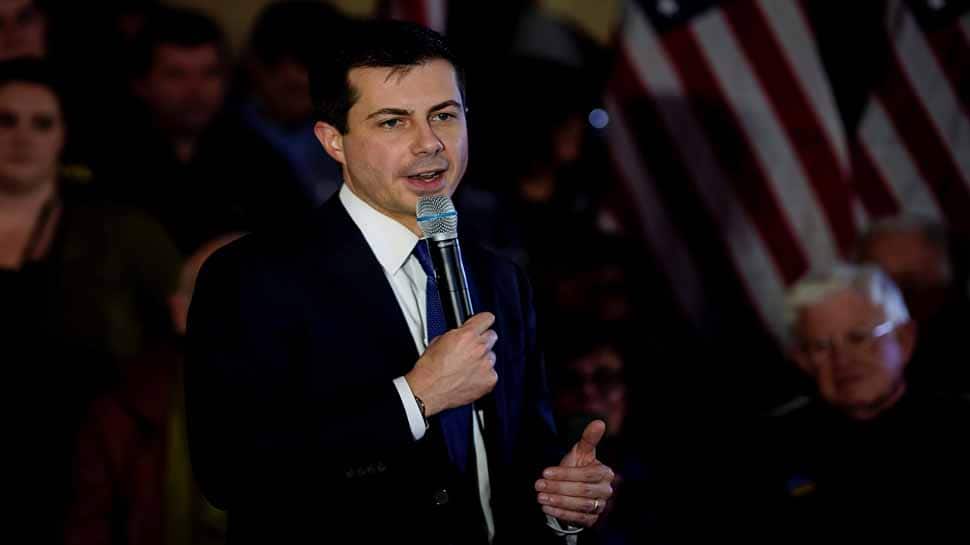 Washington/Manchester: Pete Buttigieg narrowly won Iowa`s Democratic presidential caucuses, the state party said on Thursday, after a long delay in releasing the results of the first contest in the race to pick a challenger to Republican President Donald Trump.

Buttigieg, the moderate 38-year-old former mayor of South Bend, Indiana, edged out progressive US Senator Bernie Sanders by 26.2% to 26.1% of state-delegate equivalents - the data traditionally used to determine the winner - with 100% of precincts counted, the Iowa Democratic Party said.

US Senator Elizabeth Warren finished third with 18%, while former Vice President Joe Biden limped to a disappointing fourth with 15.8%. US Senator Amy Klobuchar finished fifth with 12.3%.

The results, which have been marred by technical and organizational errors, could reshape the 2020 race for the Democratic presidential nomination for November`s election and raise doubts about the future of Biden, the one-time front-runner.

Iowa Democrats had poured into 1,600 schools, community centers and other public locations on Monday night to make their choices among the 11 candidates in the Democratic race.

But the Democratic candidates had already departed Iowa and turned their attention to the next nominating contest in New Hampshire on Feb. 11 before the first results were even released in two batches on Tuesday..

Officials blamed inconsistencies related to a new mobile app used for vote counting for the unusual delay in Iowa, the state that traditionally kicks off a US presidential election campaign that culminates this year on Nov. 3.

Democratic National Committee Chairman Tom Perez called on Thursday for an audit of the Iowa caucuses after the technical glitch created uncertainty about the accuracy of the tally.

"I want to make sure every Iowa voter knows that their vote was counted," Perez said in an interview with MSNBC.

He said any review was unlikely to change the composition of the state`s 41 delegates to the Democratic National Convention.

Iowa Democratic Party leader Troy Price said the local party did not plan to start an immediate audit and it would do so only if a candidate asked for one.

Before the final results were released, Sanders thanked Iowans for "the very strong victory they gave us" in Monday`s caucuses.

Asked later at a CNN event if he would request a recanvass, Sanders said: “We’ve got enough of Iowa. I think we should move on to New Hampshire.”

He added: "I suspect that at the end of the day, Mr. Buttigieg and I will have an equal number of delegates to the national convention.”

Party officials initially attributed the delays to a technical problem with the new mobile app, but other concerns have since emerged, complicating efforts to release the final tallies.

The Iowa Democratic Party received an "unusually high volume of inbound calls" to its caucus hotline on Monday night from "callers who would hang up immediately after being connected, supporters of President Trump who called to express their displeasure with the Democratic Party, and Iowans looking to confirm details," a party official said.

The call volume was "highly irregular" compared with previous caucuses, the official said.

The New York Times has also reported that more than 100 precincts reported results that were inconsistent, had missing data or were not possible under the caucus rules, casting doubt on the count.

The Iowa Democratic Party declined to comment on inconsistencies.

Both parties have criticized Iowa`s process.

"They can`t count some simple votes and yet they want to take over your healthcare system," Trump said of Democrats during an address celebrating his acquittal on impeachment charges.

His own party, however, switched the declared Iowa winner two weeks after its own Iowa caucuses in 2012.

In Manchester, New Hampshire, Sanders called the caucus debacle a "screwup" that was unfair to all candidates.

After Iowa`s reporting issues and delays, the Nevada Democratic Party, which hosts its caucus on Feb. 22, is "scrapping both the app and ties to Shadow," the company that developed caucus-reporting apps for both Iowa and Nevada, party spokeswoman Molly Forgey said.

"Luckily for us, we had a series of backup plans in place," Forgey added.Iowa Democrats had poured into 1,600 schools, community centers and other public locations on Monday night to make their choices among the 11 candidates in the Democratic race.