The picture of Oscar Alberto Martinez and his 24-month-old daughter Valeria has gone viral on social media and sparked renewed debate about the plight of refugees and migrants who are mostly from Central America. The pair had travelled from their home country of El Salvador and were seeking asylum in the United States. 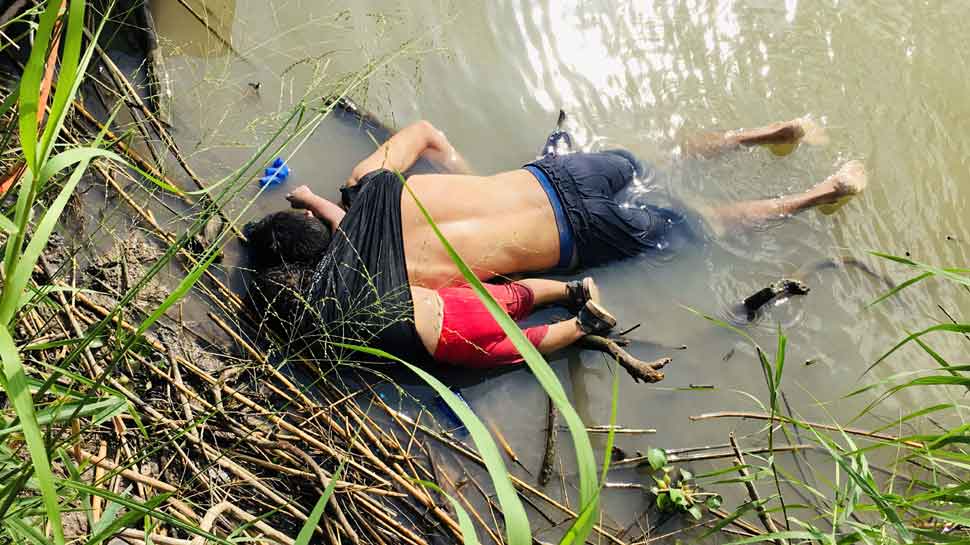 MATAMOROS: A harrowing photo of a man and his young daughter who drowned on the US-Mexico border has brought global attention to the dangers for a wave of mostly Latin American migrants travelling north, with Pope Francis on Wednesday expressing "immense sadness" at the deaths.

The picture of Oscar Alberto Martinez and his 24-month-old daughter Valeria has gone viral on social media and sparked renewed debate about the plight of refugees and migrants who are mostly from Central America. The pair had travelled from their home country of El Salvador and were seeking asylum in the United States.

The photo shows them face down in the reeds on the bank of the Rio Grande river. The father had apparently stretched his T-shirt over her to form a makeshift baby sling, and their heads are nestled together. Her red shorts bulge with a water-logged diaper.

"With immense sadness, the Holy Father has seen the images of the father and his baby daughter who drowned in the Rio Grande River," Vatican spokesman Alessandro Gisotti said. The Vatican newspaper, L`Osservatore Romano, put the picture on its front page. "The pope is profoundly saddened by their death, and is praying for them and for all migrants who have lost their lives while seeking to flee war and misery."

The portrait has galvanized attention towards record numbers of Central American migrants reaching the United States this year despite a crackdown by the administration of US President Donald Trump. Many flee their homes in Central America to escape high levels of criminal violence.

Trump, speaking at the evangelical Christian Faith and Freedom Coalition on Wednesday, said the problem at the border "could be fixed instantaneously" if Democratic lawmakers would work with him on fixing immigration laws.  "We cannot tolerate the endangerment, abuse or smuggling of children and the only way to really stop it is to change the law and the Democrats can do that immediately."

The United Nations refugee agency UNHCR compared the photograph to the picture of refugee child Alan Kurdi who drowned in the Mediterranean and whose body washed up on a beach in Turkey in 2015. Kurdi was part of a Syrian refugee wave that caused panic in Europe, prompting Turkey to effectively shut down the migrant route through Greece at the European Union`s behest.

Since then, many countries have erected barriers to migrants and some, like the European Union and the United States, have pressured their neighbours to cut the numbers of people trying to make the journey.

The picture symbolises the failure to deal with the desperation of migrant seekers, the U.N. refugee agency said. U.N. High Commissioner for Refugees Filippo Grandi said they had risked their lives because they could not get the protection they were entitled to under international law.

"The deaths of Oscar and Valeria represent a failure to address the violence and desperation pushing people to take journeys of danger for the prospect of a life in safety and dignity," he said in the statement.

Enrique Maciel, director of the migrant agency of the Mexican state of Tamaulipas, said the family had decided to cross the river after being told they needed to register for a waiting list to apply for asylum at the Matamoros-Brownsville port of entry.

To manage asylum flows, the United States has in recent years implemented a system known as "metering" which puts daily limits on the number of asylum seekers processed at ports of entry, leading to weeks-long waiting lists in dangerous border towns.

That system has contributed to growing numbers of migrants crossing the border illegally to hand themselves into authorities and ask for asylum. Migrant rights activists say such limits on people`s access to asylum can put them in harm`s way, while driving migration underground and squeezing it into new routes.

Trump has threatened Mexico with trade tariffs until it agreed to help cut migrant numbers, amid a surge that has overwhelmed US border facilities, with immigration lawyers citing children being held for weeks without adequate food or hygiene.

The US Customs and Border Protection agency said on Tuesday its acting commissioner was resigning, as House of Representatives Democrats passed a $4.5 billion funding package for programs that house, feed, transport and oversee Central American families seeking asylum.

US officials told Congress on Wednesday that they did not have adequate staffing and facilities to adequately handle the surge of migrants seeking asylum and made it harder to intercept drug smuggling and staff customs operations at ports of entry.

US border patrol agents have apprehended 664,000 people along the southern border so far this year, a 144 percent increase from last year, said Brian Hastings, chief of law enforcement operations for the US Border Patrol. "The system is overwhelmed," he said.