Portugal wildfire under control, firefighters remain on the ground 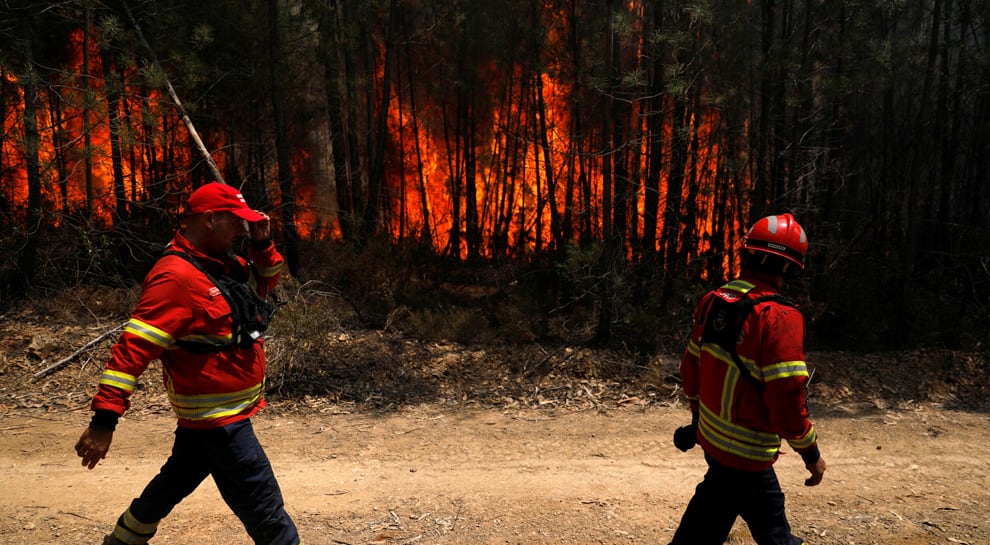 LISBON: More than 1,000 firefighters managed to bring a major wildfire in central Portugal under control on Tuesday, and the operation will carry on to avoid reignitions, officials said. After around 70 hours, the last of three wildfires that broke out on Saturday in Castelo Branco, a district 225 km (140 miles) northeast of Lisbon, is under control, with firefighters now keeping an eye on adverse weather conditions.

Strong winds, high temperatures and low humidity are expected later on Tuesday, the Civil Protection said. So far, 41 people have received support from emergency services, including 16 people who suffered minor injuries and one who was in serious condition. Portugal`s Civil Protection department said some villagers had been evacuated as a precaution and houses had been destroyed.

Villagers, as well as authorities in Macao and Vila de Rei, areas in the heart of the fire zone, said there were not enough firefighters and resources to combat the flames. "A tractor burned, a jeep burned and a house burned. No firefighter showed up, no police, nobody showed up," a local resident, Carlos Martins, told Reuters. "We were alone."

Covered in eucalyptus and pine trees, central Portugal is frequently hit by summer blazes, with hilly terrain making it especially difficult for firefighters to reach. Around 1,020 firefighters remain on the ground, supported by 320 firefighting vehicles and three aircraft. No more firefighters will be mobilised, Civil Protection said.

Data from the European Union fire-mapping service showed about 8,500 hectares (21,000 acres) burned over the weekend. The fire was small in comparison with a massive blaze that hit the same region in June 2017, killing 64 people and burning about 55,000 hectares (136,000 acres) in a few days. That was the worst disaster in modern Portuguese history.

Internal Administration Minister Eduardo Cabrita said police had opened an investigation into the fires. Portugal`s judiciary police have collected evidence that could be related to the fires` origin, an official told Lusa news agency.