Russian President Vladimir Putin said that US President Donald Trump, who faces an impeachment inquiry over accusations that he pressured Ukraine`s president to dig up dirt on a political rival ahead of the November 2020 election, had done nothing wrong by looking into possible cases of corruption. 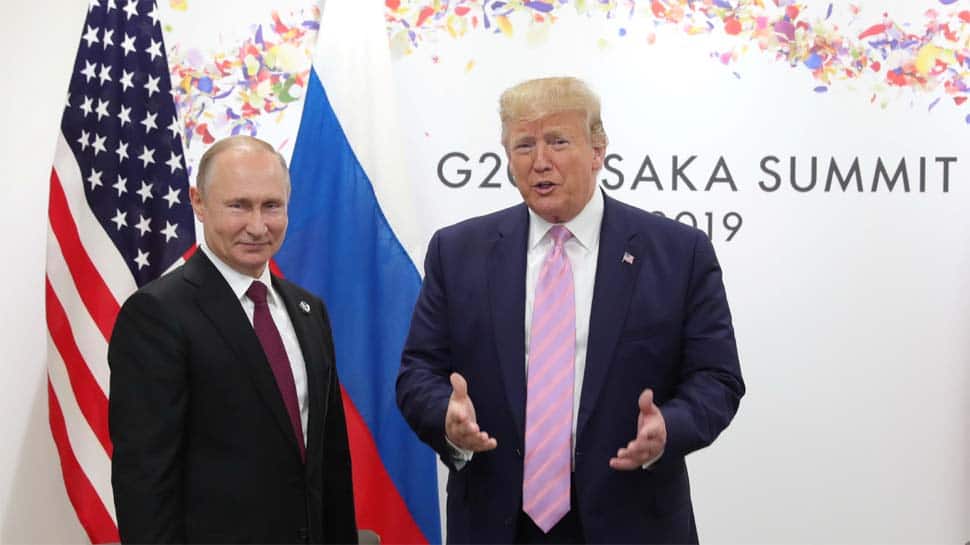 Russia's President Vladimir Putin and US President Donald Trump attend a meeting on the sidelines of the G20 summit in Osaka, Japan on June 28. (REUTERS Photo)
Share:
Edited By:

MOSCOW: Russian President Vladimir Putin on Wednesday sided with his US counterpart Donald Trump in the domestic political storm raging in the United States, and briefly joked that Moscow would hack the U.S. presidential election in 2020.

Putin said Trump, who faces an impeachment inquiry over accusations that he pressured Ukraine`s president to dig up dirt on a political rival ahead of the November 2020 election, had done nothing wrong by looking into possible cases of corruption.

Putin said he had not seen any evidence of Trump pressuring Ukrainian President Volodymyr Zelenskiy in the reconstructed transcript of the conversation released by the White House.

"...I don`t see anything compromising at all. President Trump asked his colleague to investigate possible corrupt deals by former administration employees," Putin told a conference in Moscow. "Any head of state would be obliged to do this."

Putin cast the accusations against Trump as the latest attempt by US Democrats to oust the president after what he said was the failure to find evidence of collusion between the Republican Trump and Russia in 2016 election meddling.

"We see what`s going on in the United States - all pretexts are being used to attack President Trump. Now it`s Ukraine... It became clear there was no secret deal between Russia and Trump`s team... Now another pretext has been found linked to Ukraine".

US intelligence agencies have said Russia interfered in the 2016 presidential election campaign in order to tilt the vote in Trump`s favour. Moscow has denied any interference.
Pressed by a moderator to speak to fears of a Russian attempt to interfere in the elections next year, Putin leaned into the microphone for comic effect.

"I`ll tell you a secret - yes, we`ll definitely do this to cheer you up over there once and for all," Putin said, drawing applause from the hall in Moscow. He ridiculed the U.S. intelligence assessments of past election meddling, saying that Moscow had better things to do and that in any case the Kremlin would be prepared to work with whomever the United States elected as its president. "If this is President Trump, then we will work with Trump. If not, then not."

The US House Intelligence Committee`s chairman said on Sunday that Congress was determined to get access to Trump`s calls with Putin and other world leaders and cited concerns that Trump may have jeopardised national security.

Putin said he would not mind if his phone calls with Trump were published and that, because of his intelligence background, he always assumed that his words could potentially be published whenever he speaks. "I haven`t done the work I do now my entire life and my previous experience taught me that any conversation can be published," Putin, who once worked for the KGB, said.