Senior South Korean officials, including President Moon Jae-in, are launching a series of meetings with US counterparts, in a bid to jumpstart stalled denuclearisation talks with North Korea and mend fraying ties in their alliance. 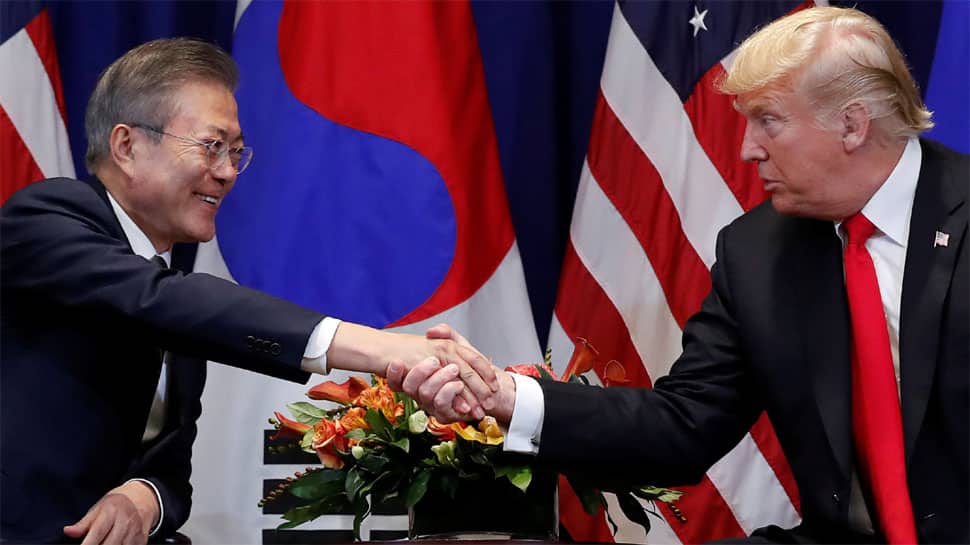 Senior South Korean officials, including President Moon Jae-in, are launching a series of meetings with US counterparts, in a bid to jumpstart stalled denuclearisation talks with North Korea and mend fraying ties in their alliance.

Moon will hold a summit meeting with President Donald Trump in Washington on April 11 to discuss North Korea and other alliance issues, the White House said on Friday.

"The alliance between the United States and the Republic of Korea remains the linchpin of peace and security on the Korean peninsula and in the region," it said in a statement.

The second summit between Trump and North Korean leader Kim Jong Un fell apart in Hanoi in February over differences about the limits Pyongyang was ready to put on its nuclear programmes and how willing the US was to ease sanctions.

Trump`s failure to seal a deal was a blow to Moon, who has been vocal in his conviction that Kim is willing to abandon his nuclear arsenal.

Washington and Seoul have also tussled over the cost of US troops in South Korea, with Trump demanding that Seoul pay more toward maintaining some 28,500 of them.

The North has nearly completed work to rebuild its Sohae missile launch site in the northwestern town of Tongchang-ri that Kim, at his first summit with Trump last June, had vowed to dismantle, South Korean lawmakers said on Friday.

The lawmakers, briefed by Seoul`s intelligence agency, added that a uranium enrichment facility at the North`s Yongbyon main nuclear complex was operating normally, though a 5-megawatt reactor there has not been operational since late last year.

Ahead of the Trump-Moon summit, South Korea said it was sending its foreign and defence ministers, and other senior officials, to meetings in Washington.

The lack of progress with North Korea has become a domestic problem for Moon, who has staked much of his political capital on improving relations with Pyongyang.

A Gallup poll on Friday showed Moon`s approval ratings at a record low of 43 percent as respondents complained about the stalemate with the North while the economy suffers.

South Korea`s defence ministry said it proposed military talks with the North last week but there was no response from Pyongyang.

Last week the North also pulled out of a liaison office with South Korea agreed during Moon`s summit with Kim, only to reverse the move and send back some officials three days later.

On Friday, the Unification Ministry said the North`s staffing at the office had returned to "normal levels", though a weekly meeting was not held as the North`s chief representative was absent.

'Come with a plan,' UN chief Antonio Guterres to world leaders ahead of climate summit