Russian Aerospace Force has ordered 76 Sukhoi Su-57 fighters and the first aircraft will be delivered before the end of 2019. The Su-57, which first flew on January 29, 2010, has already been tested under combat conditions in Syria. 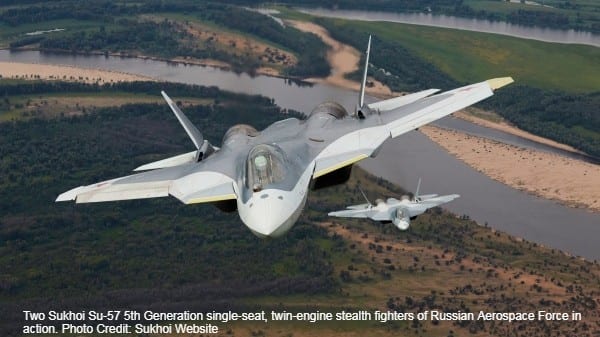 Russia has started the mass production of Sukhoi Su-57 5th Generation stealth fighter. Sukhoi Aircraft Company, which is a part of Russia’s United Aircraft Corporation, released a brochure on its 80th anniversary on Monday which revealed that a contract with the Defence Ministry has been signed for over 70 single-seat, twin-engine multirole Su-57 jets. The Russian fighter is the only 5th Generation combat aircraft which is comparable to the F-22 Raptors and F-35 Lightning II jets of the United States of America.

"Multinational aviation system of the fifth generation, which has highly-intelligent onboard equipment, is barely noticeable and is also characterised by a great line of aerial targets interception and ground targets destruction. Mass production was launched in 2019 and a long-term contract was signed with the Defence Ministry for delivering over 70 aircraft," according to the brochure published by Russia's Sputniknews.com.

Russian news agency TASS quoted the office of Deputy Prime Minister Yuri Borisov as saying that Sukhoi Aircraft Company has started to implement the Su-57 contract. "A state contract was signed at the Army 2019 international arms exhibition between the Defense Ministry of Russia and the Sukhoi Company for the delivery of a batch of Su-57 fifth-generation fighter jets. The Sukhoi has started to fulfil its contractual obligations," Borisov's office reported according to TASS.

Russian Aerospace Force has ordered 76 Su-57 fighters and the first aircraft will be delivered before the end of 2019. The Su-57, which first flew on January 29, 2010, has already been tested under combat conditions in Syria.

Russia is also offering the Su-57 to the Indian Air Force with Russia’s Federal Service for Military and Technical Cooperation (FSMTC) Deputy Director Vladimir Drozhzhov saying that the two countries "should resume this project".

Earlier in March 2019, Russian Minister of Industry and Trade Denis Manturov had told the Interfax news agency that the IAF would be interested in having the Su-57, which he called the latest supersonic stealth jet in the world.

Manturov had also pointed out that Russia and India share deep defence ties and the latter was the biggest buyer of the arms manufactured by the former. India and Russia had partnered during the initial development of the Su-57, then known as Prospective Airborne Complex of Frontline Aviation (PAK FA or T-50). Later the IAF had some reservations about the capabilities of Su-57 and pulled out of the programme but kept the door open by stating that it would rejoin the project of its concerns were addressed.

Even IAF Air Chief Marsal Birender Singh Dhanoa had told Russia military newspaper Krasnaya Zvezda during his July 9-12 visit that India would take a call on the Su-57 only after its entered service with the Russian Air Force. Russia will officially unveil the export version of Su-57 during the November 2019 Dubai Air Show. The fighter will be called Su-57 E (export).

On the other hand, the F-22 and F-35 are already in service with the US Air Force. Several close allies of the US including the United Kingdom, Italy, the Netherlands, Australia, Canada, Denmark, Norway, Belgium, Japan, South Korea, Israel and Singapore also operate the F-35.