India is likely to take up with UK the issue of violent protets outside Indian High Commission in London. 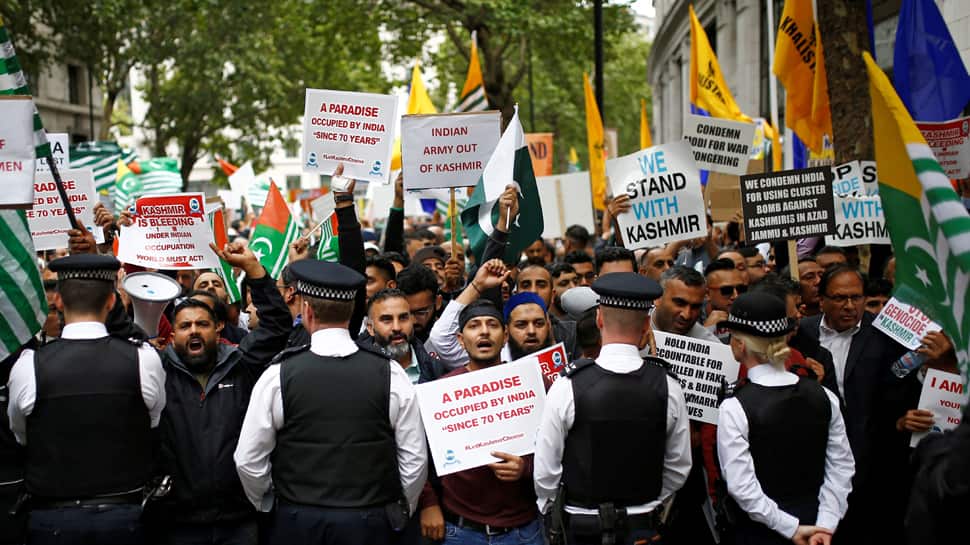 Two persons were on Wednesday arrested after Pakistani diaspora along with Khalistanis launched a massive protest outside the Indian High Commission in London on Tuesday and broke a window pane, drawing widespread condemnation.

UK's metropolitan police in a statement to WION said that “there were two arrests for criminal damage at yesterday’s event outside the Indian High Commission”.

The development has irked New Delhi, which is expected to take up with London Tuesday's protests, which were announced by Pakistani Foreign Minister SM Qureshi from the National Assembly in Islamabad.

London Mayor Sadiq Khan reacted to the incident, saying, “I utterly condemn this unacceptable behaviour and have raised this incident with Metropolitan Police to take action.”

The protestors were held over revocation of special status for erstwhile state of Jammu and Kashmir.

This is second major incident of protest outside the Indian High Commission in London in less than a month. The Pakistani diaspora launched a violent protest on August 15 outside the mission, leaving many members of Indian community stranded inside. Four people were arrested at that time.

The fresh protests came on the day when British foreign secretary Dominic Raab “deplored” the violent protest on August 15.

"Any violence is deplorable. It should not be conducted in this country or anywhere else for that matter. What we now need to do is to reduce those tensions, also on positive sides build-up, confidence-building measures to allow proper between not only communities in Kashmir but also India and Pakistan", Raab said in the British Parliament in response to a question.

Last week, ahead of their meeting on the sidelines of G7 summit, Prime Minister Narendra Modi had spoken to his British counterpart Boris Johnson and raised the issue of violent protests that took place outside the Indian High Commission.

A statement released by New Delhi had said that Prime Minister Modi “drew attention to the challenges posed by vested interests pursuing their motivated agenda, including by violent means”.

“In this context he referred to the violence and vandalism perpetrated by a large mob against the High Commission of India in London on the last Independence Day of India,” the statement further read.

The British Prime minister had expressed regret over the incident and assured the safety of the Indian High Commission.

Johnson had “assured that all necessary steps would be taken to ensure safety and security of the High Commission, its personnel and visitors”.

India had taken up with the United Kingdom the violent protests which took place outside the Indian High Commission on Independence Day and conveyed its concerns on how the security mission was undermined.