US abortion-rights activists had already vowed to go court to block enforcement of the Alabama measure, the strictest anti-abortion law yet enacted by abortion foes aiming to provoke a reconsideration of the Roe v. Wade ruling. 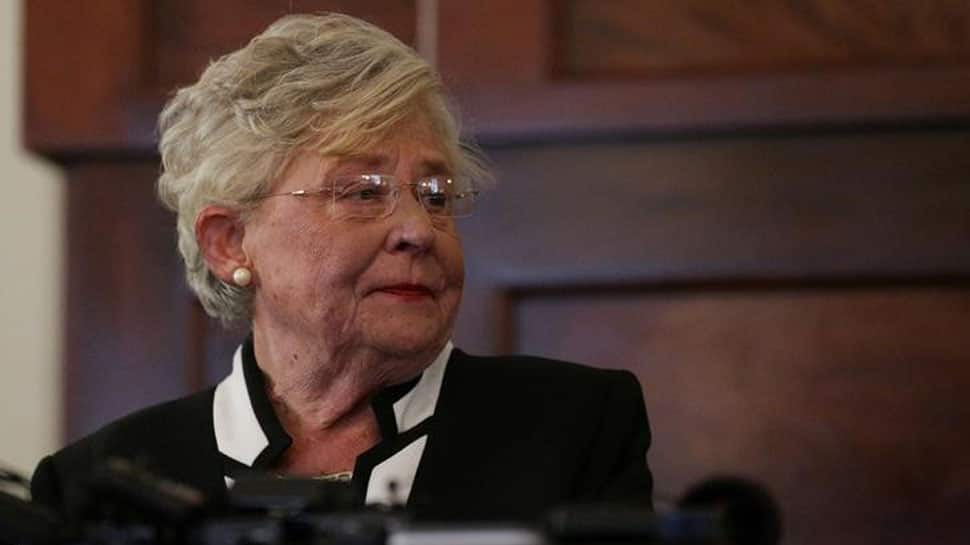 Alabama's governor on Wednesday signed a bill to ban nearly all abortions in the state, even in cases of rape and incest, in political conservatives' latest challenge to the landmark 1973 US Supreme Court decision establishing a woman`s right to terminate her pregnancy. US abortion-rights activists had already vowed to go court to block enforcement of the Alabama measure, the strictest anti-abortion law yet enacted by abortion foes aiming to provoke a reconsideration of the Roe v. Wade ruling.

Governor Kay Ivey, a Republican, signed the measure a day after the Republican-controlled state Senate approved the ban and rejected a provision to allow abortions for women and girls impregnated by rape or incest. "To the bill’s many supporters, this legislation stands as a powerful testament to Alabamians’ deeply held belief that every life is precious and that every life is a sacred gift from God," Ivey said in a statement. "To all Alabamians, I assure you that we will continue to follow the rule of law." The law would take effect in six months.

Legislation to restrict abortion rights has been introduced this year in 16 states, four of whose governors have signed bills banning abortion if an embryonic heartbeat can be detected. Planned Parenthood joined the American Civil Liberties Union on Wednesday in filing a legal challenge to Ohio`s recent ban on abortions after six weeks of pregnancy.

The Alabama bill goes further, banning abortions at any time unless the mother`s health is in danger. Those performing abortions would be committing a felony, punishable by up to 99 years in prison. A woman who receives an abortion would not be held criminally liable.

Most of the Democratic candidates seeking their party`s 2020 nomination to run for the White House condemned the Alabama law, calling it an attack on women`s rights and vowing to fight to uphold legal access to abortion. "The idea that supposed leaders have passed a law that would criminalize a physician for assisting a woman on something that she, in consult with her physician, with her God, with her faith leader, has made the decision to do, that is her body that you would criminalize," US Senator Kamala Harris of California, one of the large field of hopefuls, said at a town hall on Wednesday morning in Nashua, New Hampshire.

Some on Twitter had called on their allies to mail coat hangers to Ivey, as a reminder of the illegal abortion practices common before it was made legal. Christian television broadcaster Pat Robertson, a staunch critic of Roe v. Wade, said the Alabama law "has gone too far." “It’s an extreme law, and they want to challenge Roe versus Wade. But my humble view is that this is not the case we want to bring to the Supreme Court because I think this one will lose,” Robertson said on his program, "The 700 Club."

Anti-abortion advocates are aware that any laws they pass are certain to be challenged. Courts this year have blocked a restrictive Kentucky law and another in Iowa passed last year. But supporters of the Alabama ban said the right to life of the fetus transcended other rights, an idea they would like tested at the Supreme Court.

The high court, now with a majority of conservative justices after Republican President Donald Trump appointed two, could possibly overturn Roe v. Wade. That decision held that the due process clause of the 14th Amendment provides a fundamental right to privacy that protects a woman`s right to abortion.

Roe v. Wade did allow states to place restrictions on the procedure from the time a fetus could viably survive outside the womb, except in cases in which a woman`s health was otherwise at risk. A fetus is generally considered viable at 22 to 24 weeks. A full-term pregnancy typically is about 40 weeks.

Just this year, Georgia, Kentucky, Mississippi and Ohio enacted statutes outlawing abortion after a doctor can detect an embryonic heartbeat. Opponents call the "heartbeat" legislation a virtual ban because the embryonic cardiac activity can be detected as early as six weeks, before a woman may even be aware she is pregnant.

No easy options for China as trade war, US pressure bite