Ahead of Bihar Assembly elections, JDU's new poster featuring Nitish Kumar has a message for rivals as well as partners

The message is clear for the JDU's political partners as well as rivals in posters put up outside party office in Patna. 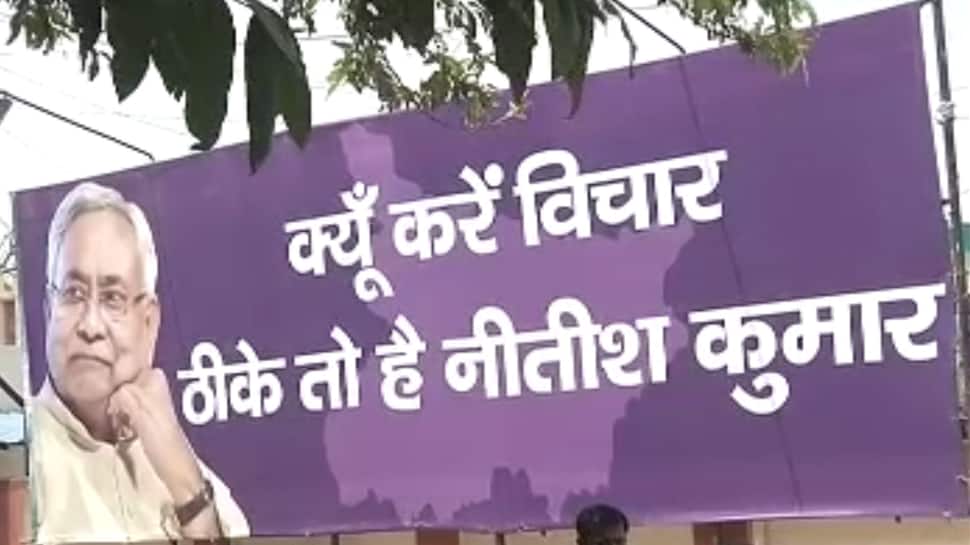 Politics in Bihar is beginning to take centrestage with the state Assembly elections, slated to be held in 2020, getting nearer. Much before the announcement of polls in Bihar, the Janata Dal United (JDU), which is in power in alliance with the Bharatiya Janata Party (BJP), has conveyed that there cannot be any replacement for Chief Minister Nitish Kumar.

The message is clear for political partners as well as rivals in posters put up outside the JDU office in Patna. The text on the posters say, “Kyun karein vichar, thike toh hai Nitish Kumar (Why to even discuss when Nitish Kumar is doing good).”

Speaking to Zee News, JDU spokesperson Sanjay Singh said that the slogan represented the voice of 12 crore residents of Bihar, adding that there is no vacancy for the post of Chief Minister in the state.

Dismissing any differences with ally BJP over the issue of chief ministership, Singh said that the National Democratic Alliance (NDA) in Bihar was “solid as rock”. Referring to the seat sharing between the two parties, he said that a decision on the same would be taken by the central leadership of the parties.

The JDU also ruled out the option of returning to the Mahagathbandhan, which comprises the Rashtriya Janata Dal (RJD) and the Congress, among others. The JDU spokesperson said that the possibility of siding with those who are involved in corruption was out of question.

Targeting former JDU leader and Hindustan Awam Morcha (HAM) leader Jitan Ram Manjhi, Singh added that nobody pays any heed to what for the former Bihar chief minister says. This was in reference to Manjhi’s recent remark about the possibility of the JDU returning to the Mahagathbandhan.

The latest slogan of the JDU, which is centred around Nitish Kumar, is very similar to a similar one coined before the previous Bihar Assembly elections in 2015. During the previous polls, Prashant Kishor’s I-PAC was handling the campaign for Nitish Kumar and had then coined a slogan – ‘Bihar mein bahar ho, Nitishe Kumar ho’ – which roughly translates to ‘Let Bihar flourish under Nitish Kumar’.