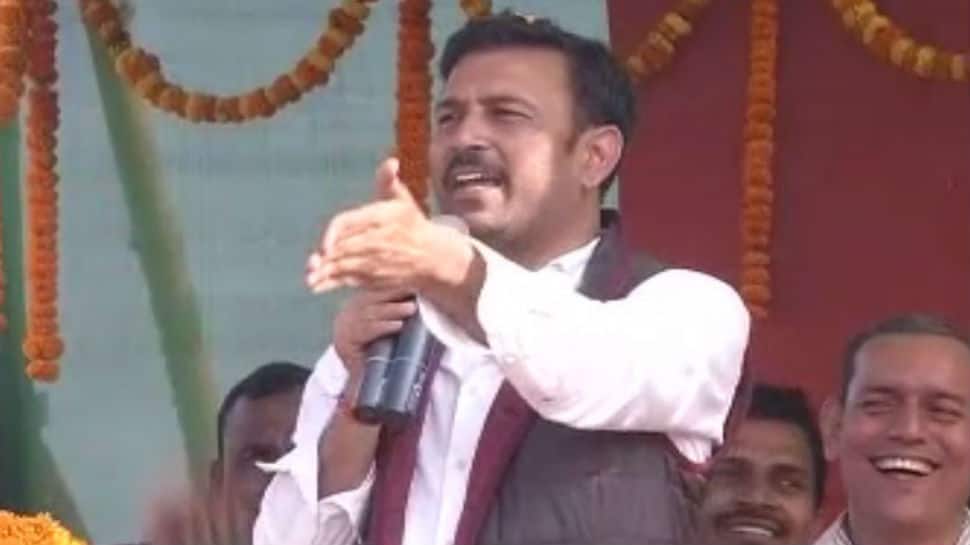 Ranchi/New Delhi: He sports blue jeans and a crisp shirt, ditching the ubiquitous kurta. His love for football defies the quintessential image of a politician. In Jharkhand's Silli, his home turf, he runs Birsa Munda Archery Academy.

But who is Sudesh Mahto, the man who appears to be holding the strings to the Chief Minister's chair in Jharkhand?

In 2014, the Bharatiya Janata Party (BJP) swept to power in the 82-member Assembly with 37 seats and 31.26 per cent vote share. It had Mahto's All Jharkhand Students Union (AJSU) as ally winning 5 seats and 3.68 per cent vote.

As the alliance disintegrated this time with Mahto refusing to visit Delhi sensing the BJP`s hard bargain, Mahto-led AJSU has gone back to what remains its USP -- talk local, espouse tribal cause, win a chunk of seats and play the kingmaker.

"The AJSU had played the role of opposition despite being in the government. Our slogan is this time there will be a government of villages. We have been raising the people`s voice and espousing their causes," he told IANS.

In 2013, ahead of 2014 Assembly polls, Mahto termed his struggle as the battle for "Ma and Mati", borrowing West Bengal Chief Minister Mamata Banerjee`s "Ma, Mati, Manush" slogan. This time again, he is focusing on local and tribal-OBC issues.

Here lies the problem for the BJP. Despite Defence Minister Rajnath Singh`s claim that the party would sweep back to power in the state, senior party functionaries in New Delhi do accept, of course in hushed tones, that the party had received enough complaints from its state unit against Chief Minister Raghubar Das. Also, Das is a non-tribal leader in a largely tribal state with around 30 Scheduled Tribes.

And that makes sense for Mahto`s stand. Mahto`s attempt to appropriate the tribal legacy isn`t an afterthought. In 2016, donning a tribal attire, he had promised the statue of Ulgulan at the Birsa Jan Panchayat. His links with the family of Birsa Munda, the architect of the Santhal movement, is well known.

Mahto, an OBC (Other Backward Caste) himself, has flawlessly swung between OBCs and tribals. He belongs to the sizeable Kurmi caste. The caste`s demand to be included in the the Scheduled Tribe category has been ignored, so far.

Mahto is demanding a large reservation slice for Kurmis, without disrupting the existing quota for tribals. The stand helps him get accepted by both.

Mahto may not have been able to make the AJSU as big as the Jharkhand Mukti Morcha (JMM) or as dominating as the BJP, but his rise in state politics has been interesting.

He was first elected to the Bihar Assembly when he was just 25. He kept winning the Silli seat and created a mass appeal among youths through simple acts of jogging in the morning or donning jeans, in Ranchi, the capital of Jharkhand, that is not used to cosmopolitan politicians.

The AJSU contested the 2005 and 2009 Assembly elections. He could not win big, but enough to remain significant in a state that has witnessed fractured mandates or shaky governments.

Mahto, however, lost the 2014 election from Silli. This time, he is determined to win riding the anti-JMM, anti-BJP and pro-tribal stance.

A BJP functionary in Delhi told IANS, the primary reason for the disintegration of the alliance was Mahto`s "stubbornness" on more seats. It wanted to spread the AJSU at the cost of BJP, which couldn`t be acceptable to us, he said.

What if Mahto ends up getting more seats than last time and the BJP fails to gain majority? BJP refuses to accept both on record and off record that it may fall short of majority.

Given that BJP rebels, who won the polls on the NCP ticket in Maharashtra, proved costly for the BJP, it may have to do business with Mahto again, if it falls short of majority.

But will Mahto be ready to do business with the BJP again? The AJSU leader is keeping cards to his chest.

On the prediction by various surveys of a hung House, the former Deputy Chief Minister would only say, "These are hypothetical questions. We will do better than previous polls."

Will Mahto be the Dushyant Chautala of Jharkhand?

He smiles away waving at his supporters on his state-wide campaign tour.