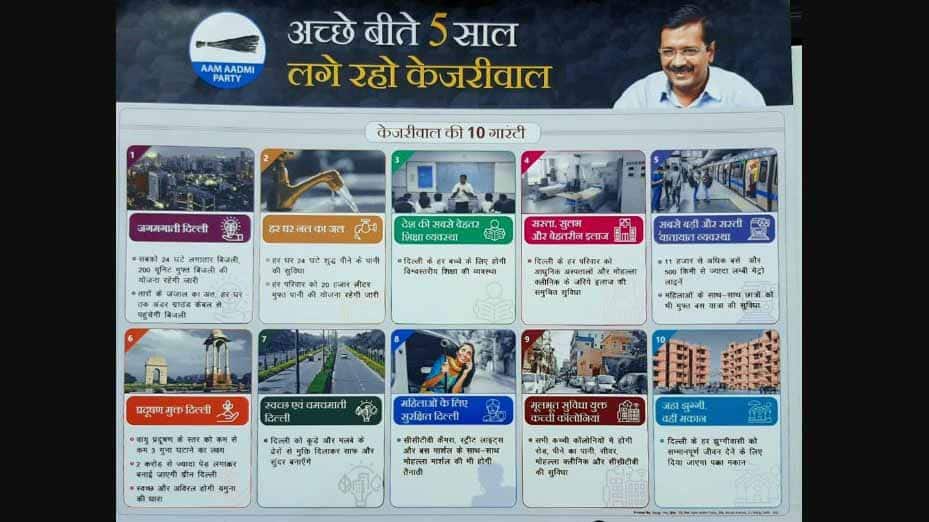 Ruling Aam Aadmi Party (AAP) on Sunday (January 19) released its manifesto for upcoming Delhi Assembly election, scheduled to take place on February 8. The manifesto titled 'Kejriwal Ka Guarantee Card' was released by Delhi Chief Minister Arvind Kejriwal in the presence of other senior leaders of the party. On his part, CM Kejriwal said that he will release the long manifesto in the next 10 days.

The AAP has also promised to end the problem of hanging electricity wires in different parts of Delhi. In the 'guarantee card' Kejriwal has said that his government has already linked 93% households of Delhi with water supply and very soon every house in Delhi will receive clean water.

The AAP has also given a guarantee that the state government will ensure that every child born in Delhi will receive education till graduation with government support. The Kejriwal-led government has also promised to give free treatment to every family in Delhi.

CM Kejriwal has given a guarantee that more 'mohalla clinics' will be set up in the future and the AAP government will also build new hospitals in Delhi. The AAP's 'guarantee card' also said that metro connectivity of 500 km will be built in the future and Delhi will get world-class transportation facilities.