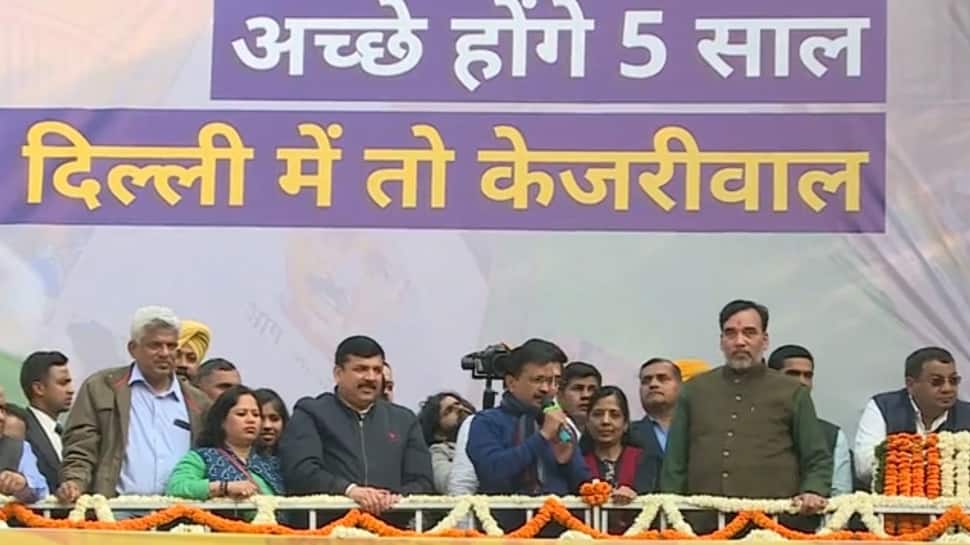 Calling the win a victory for the entire nation, Kejriwal said that it is the new 'politics of work' that has taken birth in Delhi. The AAP convener, who stormed back to power in Delhi for the third time, said, ''Dilli walon gazab kar dia aap ne. I love you."

An exuberant Kejriwal also said, "I thank people of Delhi for reposing their faith in AAP for the third time. This the victory of the people who consider me as their son and voted for us," added Kejriwal.

"My family also supported me. It is my wife`s birthday. I had cake, you will also get it," Kejriwal said.

Kejriwal who had visited a Hanuman Temple a day before the voting invoked Lord Hanuman after his massive win. ''Today is Tuesday - the day of deity Lord Hanuman who has blessed us. Lord Hanuman has blessed us, may God give us more strength to serve people of Delhi. I thank the almighty. Let's pray that the Lord keeps his blessings on us and the AAP government and guide us in making Delhi a world-class city.''

"People elected us with high hopes. I cannot do it alone, we all have to work together. Delhi has given the message that they will vote for those who will provide schools, cheap electricity, and hospitals. This is a new kind of politics. It is a new and good sign for the nation," added Kejriwal.

According to the latest trends, AAP is leading in 63 out of 70 assembly seats while the BJP is ahead in seven constituencies.

Sunita Kejriwal, wife of Kejriwal said, "It's the biggest gift I've received (she celebrates her birthday today). This is the victory of truth. I think politics should be done on the basis of issues. Political parties should learn that such comments shouldn't be made."

BJP chief JP Nadda tweeted, "BJP accepts the mandate of the people. We will play our role as a constructive opposition and raise public issues in the Assembly. I congratulate Arvind Kejriwal, his party and hope that his govt will work for the development."

Maharashtra Chief Minister Uddhav Thackeray congratulated Arvind and the people of Delhi for emerging victorious in Delhi assembly election 2020. He said, ''People have shown that the country will be run by 'Jan Ki Baat', not 'Mann Ki Baat'. BJP called Kejriwal a terrorist but couldn't defeat him.''