On the last day of campaigning for the upcoming assembly election in Haryana, Prime Minister Narendra Modi on Saturday launched a scathing attack on the Congress and said that the party never worked towards eliminating the distance between devotees and Guru Nanak Dev's holy place Kartarpur Sahib. 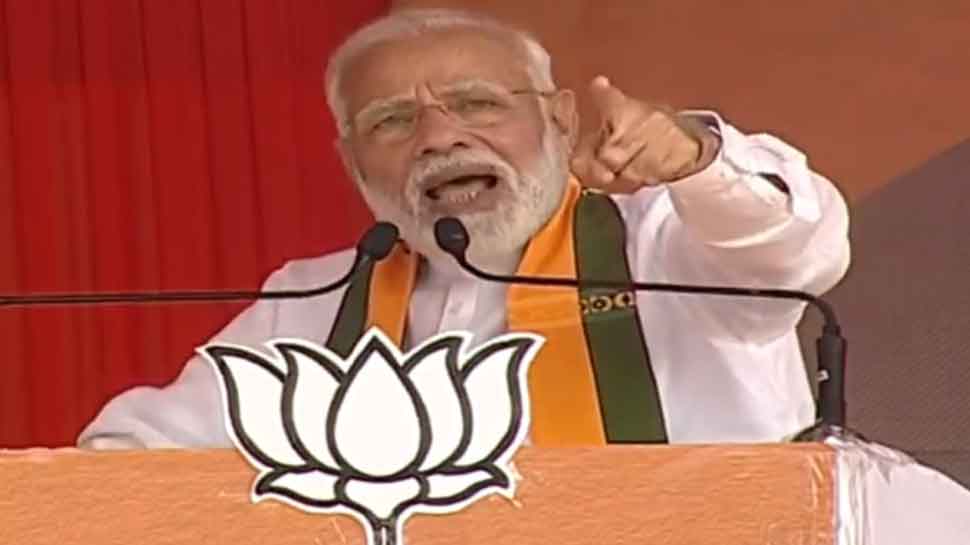 Sirsa: On the last day of campaigning for the upcoming assembly election in Haryana, Prime Minister Narendra Modi on Saturday launched a scathing attack on the Congress and said that the party never worked towards eliminating the distance between devotees and Guru Nanak Dev's holy place Kartarpur Sahib.

Saying that this opportunity has come after seven decades of independence, it is a that a big centre of our faith had to worshipped by us using binoculars for 70 years, PM Modi lashed out at the Congress and said that the party and its allies have never respected the Indian culture.

Addressing a rally in Haryana's Sirsa district on Saturday, PM Modi further attacked the Congress and said, "UPA government was responsible for drawing the dividing line in 1947, but it did not consider that devotees should not be separated from their Guru by just 4 km distance. Even after 70 years, should Congress not have tried to erase this distance ?"

The Congress and its allies never accepted the faith, tradition and culture of the Indians. The approach of Congress had with our holy places, the same approach was also with Jammu and Kashmir. For 70 years Congress did not try earnestly for a solution, PM Modi said referring to Congress' stance of not supporting the government when it revoked Article 370 from Jammu and Kashmir, taking away its special status.

PM Modi slammed Congress's laid back approach in dealing with Kashmir which led to worsening situations. PM Modi recalled when separatism in the Kashmir valley spread due to the influence of Pakistan-based terrorists and Article 370 was used a threat to scare of the government at the Centre.

PM Modi asserted that India will now determine what happens in Kashmir, and not Pakistan-sponsored terrorism. He said, "Dates will not be decided from the enemy country. Now India will decide the dates. Now the people of India and Kashmir will make policies. People sitting in enemy countries cannot determine the fate of India."

PM Modi added that the wrong policy and strategy of the Congress led to the devastation of the country's integrity."What was mentioned as temporary in Baba Ambedkar's constitution lasted for 70 years, for 70 years, the Kashmiri people governed through a temporary psychology, which paved the path towards separatism."

"So, I have finished the temporary psychology. When you made me permanent for five years, then why should I let the temporary run," PM Modi said.

The registration for the Kartarpur corridor is set to begin from October 20. Indian pilgrims will have to carry a passport, but no visa is required. Prime Minister Narendra Modi will inaugurate the 4.5-km-long Kartarpur Corridor, linking the Darbar Sahib Gurdwara in Dera Baba Nanak to the Kartarpur Sahib shrine in Pakistan, on November 8.

On October 14, Pakistan sent its own draft proposal on Kartarpur corridor mentioning that Indian pilgrims will have to pay USD 20 (approximately Rs 1,500) as fee for services to use the corridor. The Centre will take a call on the Kartarpur Corridor service fee, a condition put forward by Pakistan, after the Haryana and Maharashtra election campaigns end.