Nearly a decade after YSR was tragically killed in a helicopter crash, Jagan who won the Lok Sabha seat in 2009 from home turf Kadappa, is set to succeed him as Chief Minister. 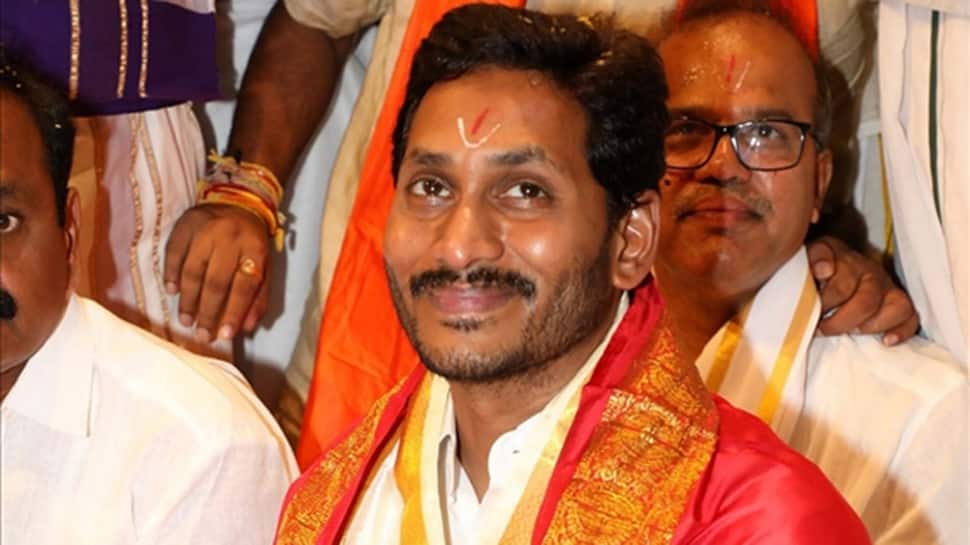 Vijayawada: YS Jaganmohan Reddy, popularly known as Jagan Reddy, has emerged tall after an epic electoral win, vanquishing his rivals to claim the top seat in Andhra Pradesh. Yeduguri Sandinti Jaganmohan Reddy, the President of the YSR Congress Party (YSRCP), who made his electoral debut in the year 2009, the same year in which his father Yeduguri Sandinti Rajasekhara Reddy or YSR, became the Chief Minister of undivided Andhra Pradesh.

The political journey of the businessman-turned-politician has indeed been meteoric. Nearly a decade after YSR was tragically killed in a helicopter crash, Jagan who won the Lok Sabha seat in 2009 from home turf Kadappa, is set to succeed him as Chief Minister.

While Jagan was ready to take over as CM after his father's death and had the backing of many legislators, the Congress party, then led by Sonia Gandhi, had other plans and propped up K Rosiah in the chief minister's chair whom they replaced with Kiran Kumar Reddy. Jagan, along with his mother YS Vijayamma, quit the Congress in 2010 to start his own party.

Jagan had then faced a series of corruption charges, which was slapped on him and his aides by the CBI after the High Court ordered a probe against him. He was arrested and jailed in 2012 and spent a total of 16 months in prison before being released on bail, just a few months before the 2014 Lok Sabha elections. In that year, the YSRCP won 67 seats in the Assembly and ate into the Congress position in Andhra politics, relegating it to second place in the state.

Success eluded him in the 2014 general elections. He lost out to Chandrababu Naidu who had tied up with actor Pawan Kalyan. There was also massive poaching of his MPs and MLAs by Naidu`s Telugu Desam Party (TDP). However, Jagan refused to admit defeat and geared up for another fight with a record `padayatara`, which stretched for 14 months and ended this January. Jagan travelled through all the districts of Andhra Pradesh talking to, shaking hands with and mingling with people, emulating his father`s trademark style.

The 47-year-old leader finally swept into power after the 2019 elections defeating a 69-year-old Chandrababu Naidu who had snapped ties with the NDA government and had attempted to stitch together a non-BJP, non-NDA government at the Centre.

Jagan will take oath as the second Chief Minister of Andhra Pradesh post its bifurcation on Thursday. Governor ESL Narasimhan will administer the oath of office and secrecy at Vijayawada`s Indira Gandhi Municipal Stadium at 12.23 pm.

The YSRCP got an absolute majority in 175-member strong Assembly. The party won 151 seats out of 175, whereas TDP`s strength was drastically reduced from 102 in the 2014 Assembly elections to a mere 23. YSRCP polled 49.9 per cent votes, while TDP got a 39.2 per cent vote share. One seat went to the Jana Sena Party led by actor-turned-politician Pawan Kalyan.YSRCP also bagged 22 Lok Sabha seats out of 25 in the state, while TDP could get only three seats.

Taking a jibe at Naidu, Jaganmohan Reddy recently said, "The fate of Chandrababu Naidu proves that God will punish those who act without justice. Chandrababu had purchased and grabbed 23 MLAs and three MPs of YSRCP in 2014. But now in 2019, his party is left with 23 MLAs and three MPs. God alone can write such great script and do such a wonderful poetic justice."