The new Donyi Polo airport in Itanagar, Arunachal Pradesh is inaugurated by PM Narendra Modi, and it is the first-ever greenfield airport in northeastern states.

Prime Minister Narendra Modi has inaugurated the much-awaited Donyi Polo Airport in Arunachal Pradesh’s Itanagar today. The airport makes history in the books of Arunachal Pradesh’s aviation sector since it is the first-ever greenfield airport in any northeastern state. The Donyi Polo airport is located at Hollongi and it will push the connectivity, trade, and tourism in hilly northeastern states. After inaugurating the new greenfield airport PM Modi will leave for Varanasi and then to Gujarat from there. The governor, who has been monitoring the construction of the airport since its foundation laying ceremony, said that it is one of the best gifts to the people of the state by Modi.

Cost of the Donyi Polo Airport

The Donyi Polo airport has been developed by the Airports Authority of India at an estimated cost of Rs 645 crore. It will have eight check-in counters and can accommodate 200 passengers during peak hours, the officials said.

Facilities and features of the Donyi Polo Airport

Spread over a 4,100 sq m area, Donyi Polo airport will be equipped with all modern facilities for passengers. It will have a 2,300 meter-long runway suitable for landing and take-off of Boeing 747, the officials said. The airport terminal building has a passenger lounge, airside facilities, and the public meeting venue. There are a few advanced landing grounds in the state, including in Pasighat and Tezu.

Donyi Polo airport is the 4th operational airport of Arunachal Pradesh. For 7 decades, after independence northeast region only had 9 airports. However, our govt made 7 new airports in just 8 years.

IndiGo Airlines will commence commercial flights from the airport on November 28. The naming of the airport reflects the reverence of the indigenous people of Arunachal for the sun (Donyi) and the moon (Polo). Flights connecting Hollongi, which is around 15 km from Itanagar, with Mumbai and Kolkata will operate daily barring Wednesday. A weekly flight service connecting Hollongi with Kolkata on Wednesdays will begin on December 3, the chief strategy and revenue officer of IndiGo, Sanjay Kumar had said recently. 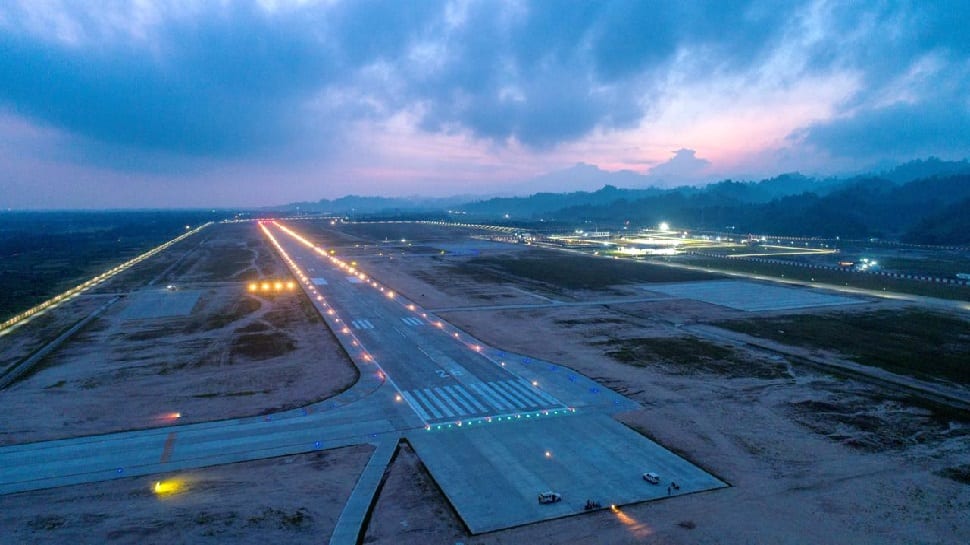 This is in line with the carrier's vision to enhance connectivity in the Northeast and the flights are designed to cater to business and leisure travellers who are constantly on the lookout for new and affordable flying options to access destinations that are known for their tourist attractions, he said.