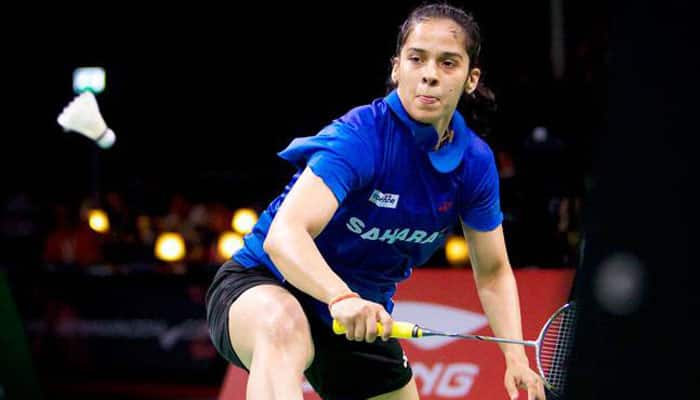 Odense: Ace Indian shuttler Saina Nehwal knocked out Olympic champion Carolina Marin of Spain in the opening round of women's singles competition in the Denmark Open here on Wednesday.

Saina, who won a bronze in the Glasgow World Championship, defeated Marin 22-20 21-18 in a hard-fought battle. She will play either Thailand's Nitchaon Jindapol or Russia's Evgeniya Kosetskaya in the next round.

Other Indians Kidambi Srikanth and H S Prannoy made positive starts to the tournament but B Sai Praneeth crashed out in the opening round of men's singles.

World number eight Srikanth overcame a spirited challenge from compatriot qualifier Subhankar Dey, who played for Greve team at the Danish league this year, 21-17-21-15 to set up a clash with Korean Jeon Hyeok Jin, the 2016 Australian Open runners-up.

On the adjacent court, Praneeth lost 10-21 15-21 to Hans-Kristian Solberg Vittinghus in a lop-sided contest.

Earlier, world number 15 Prannoy recovered from a 6-11 deficit in the second game to oust Denmark's Emil Holst 21-18 21-19 in a hard-fought match. It was his third win over the Danish shuttler. The Indian is likely to play former World No. 1 Malaysian Lee Chong Wei tomorrow.

Satwik and his mixed doubles partner Ashwini Ponnappa, who had reached the semifinals last week at Dutch Open, lost 19-21 17-21 to the local combo of Niclas Nohr and Sara Thygesen.

In men's doubles, Satwik and Chirag Shetty, who had reached the quarterfinals at Korea Open, failed to get across Korean pair of Chung Eui Seok and Kim Dukyoung, losing 21-14 18-21 17-21 in the opening round.

Another mixed doubles pair of Pranaav Jerry Chopra and N Sikki Reddy, who had reached the semifinals at Japan Open, also crashed out last night in the opening round after losing 17-21 15-21 to the Irish duo of Sam Magee and Chloe Magee.

After wrapping up the match in 48 minutes, Prannoy told PTI: "It was a tough match. He is a tricky player and I have always played close matches against him. I was trying out few things in the second game but it didn't work out. He got points and had a good lead. I was getting tired but I am happy to win. Hopefully I will be better tomorrow."

Sikki was upset with service judgments and took to twitter to vent out her frustration.

"Today's match has been played by the service umpire and the chair umpire... Well done guys ???????????? #DenmarkOpen they just made me mentally down," Sikki wrote on her twitter handle.

"Whatever rules they make there is of no use... There should be review system in the services that will be the best for the players," she tweeted.