Nehwal won her first national title in 2006, which she defended the following year. 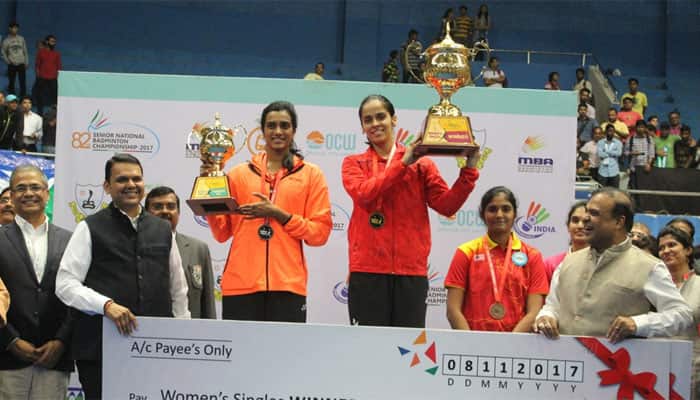 New Delhi: In a clash of India's two best female shuttlers, Saina Nehwal beat World No. PV Sindhu in straight games to become the national singles champion once again after a gap of 10 years on Wednesday.

Nehwal, who last won the national title in 2007, produced a clinical performance to beat higher ranked Sindhu 21-17, 27-25, with the second game going all the way as Rio Olympics silver medallist tried everything in her power to force a decider. The women's singles final of Senior Badminton National Championships in Nagpur was the second blockbuster final of the day.

But the 27-year-old London Olympics medallist showed grit and determination to win the game in the seventh match point. This is her third national title, in third finals.

In their third meeting, Nehwal won the first game with Sindhu committing a series of mistakes. But still, it was a tight game considering how Sindhu recovered from 13-17 down to 18-17.

Nehwal, however, started the second game in the worst possible manner, losing long rallies, including a 32-shot rally to concede a 6-4 lead. She then found the gap 15-18, despite her fightback.

Then suddenly, she found herself on match point at 20-19 with Sindhu starting to make errors. But again, Sindhu kept saving match points, for six times. At 26-25, with Nehwal on seventh match point, Sindhu crashed her return into the net.

Nehwal won her first national title in 2006, which she defended the following year.

"I think it was a very difficult game for me. Sindhu is world number 2 at the moment. I was expecting this to be very tough for me. I was able to move well today, and I was able to pick up her shots. I am really happy today. My movements were very good, and I was not thinking too much about the score. I would like to thank Gopi sir and the team for working on my movements and making me move better. My fighting spirit was quite good, and even I am surprised by how I played today. I think I played a 100 percent today. Every tournament is a new tournament. I have won the first nationals after almost 10 times," Nehwal said after the hardfought win.