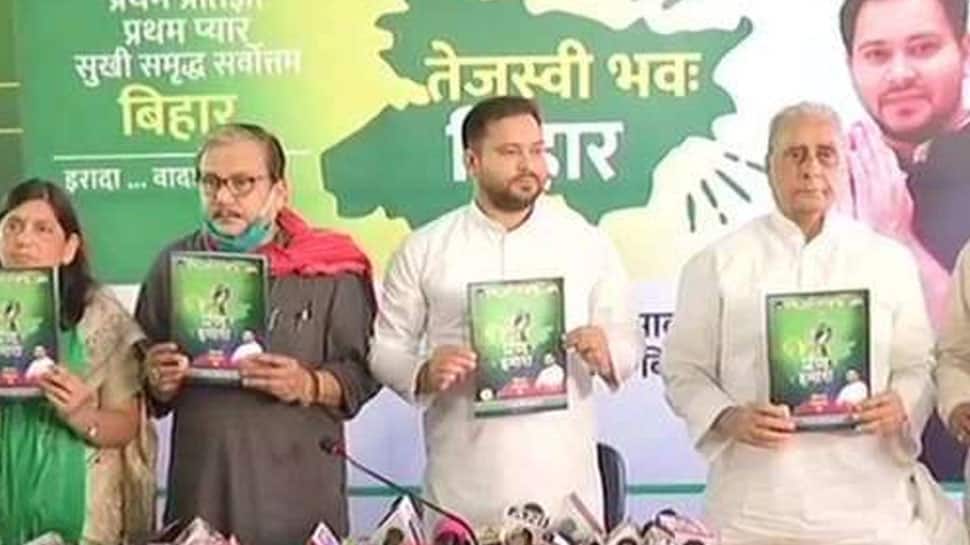 The RJD manifesto also promises to develop ‘smart village’ concept. "This is not a manifesto; this is a resolution and this will become a reality. I assure you that I will sign papers to ensure jobs to 10 lakh people on the very first day of the cabinet meeting. People used to make fun of where we will generate employment. Now, you must understand there is a difference between employment and job. Here we are talking about government jobs," Tejashwi said.

Defending his 10-lakh job promise and attacking the Bharatiya Janata Party (BJP), Tejashwi said," BJP is promising jobs but Nitish Kumar says there is no money. Who are they trying to fool?"

The manifesto also talks about the concept of "equal pay for equal work` along with providing Rs 1500 unemployment allowance for youth up to the age of 35 years, for the people who do not have a job.

On farmer issues, the manifesto aims to increase the farmers` income and promises to waive off loans. The procurement of farm produce will be done with a bonus on minimum support price.

Interestingly, the RJD manifesto’s cover page does not have former Bihar Chief Minister Lalu Prasad Yadav`s picture, who is also Tejashwi Yadav`s father. Tejashwi also spoke about the smart village concept in which concrete roads will be constructed and every panchayat will have free computer centres for locals.

For the betterment of health infrastructure, every district will have a dialysis centre and it would be free for the poor. At the Panchayat level, a primary healthcare testing facility will be provided.

The manifesto promises for an education budget to be 22 per cent of the total state budget and teachers will be inducted in government schools on a war footing along with a focus on e-learning for students.

Bihar will vote for a new government across three phases starting October 28, and results will be announced on November 10.