In Sitamarhi alone, 27 people died due to flood and rain-related incidents. Fourteen others died in Madhubani, followed by 12 in Araria, 10 in Sheohar, nine each in Darbhanga and Purnea, five in Kishanganj, three in Supaul, two in Purvi Champaran and Saharsa.

In Nawada district, eight children died while 13 others were injured after a lightening struck at a school. The injured has been admitted to Prathmik Swasthya Kendras.

Bihar's Deputy Chief Minister Sushil Modi came under intense fire from Opposition after reports emerged that he was watching Bollywood movie 'Super 30', even as the state reeled under a grim flood situation. Later clarifying that the government is doing everything to help the flood victims, Sushil Kumar said, ''I've been abused for watching movie 'Super 30'. Today also an English channel was showing 'when the state is flooded, Dy CM is watching a film'. Several works can be done at one time, we're helping flood-affected people and doing all the arrangements.'' 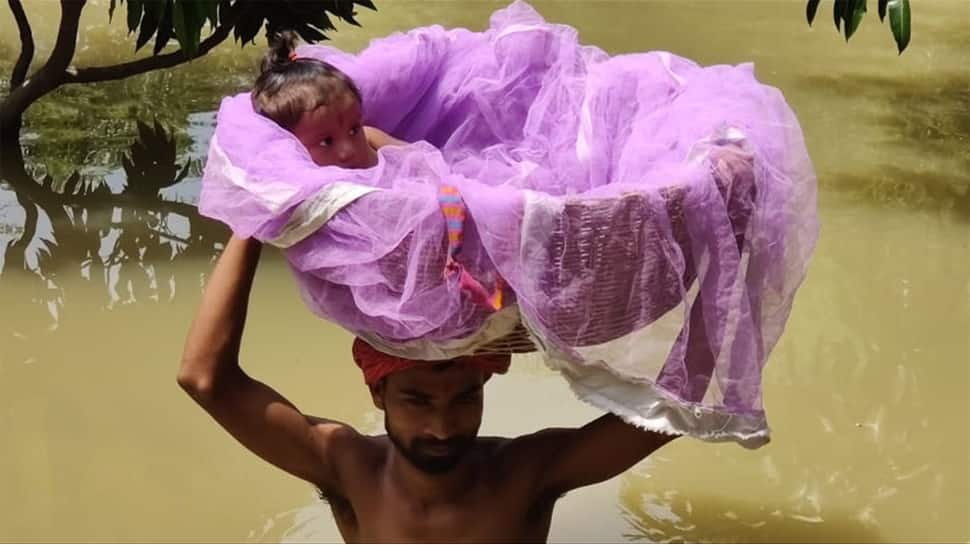 Sitamarhi: A man carries a child on his head to save the baby from the flood waters in Bihar''s Sitamarhi, on July 19, 2019. (Photo: IANS)

“Even today, many families in Bihar are unaware of the government schemes and cannot avail their benefits. I have directed the officials to identify families without accounts and ensure that their accounts are opened at the soonest,” said Nitish.