Tata Motors flags off Geared for Great challenge at VRDE 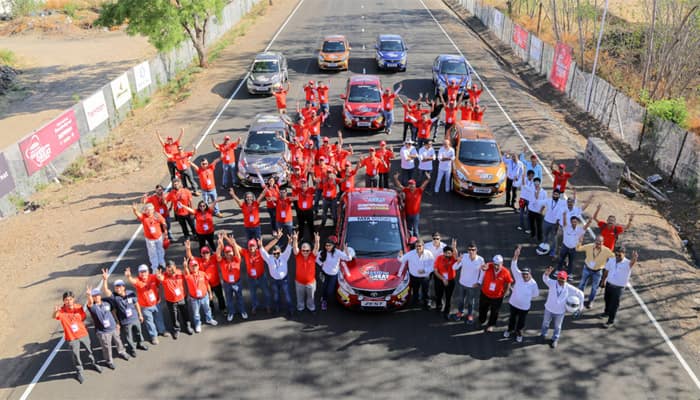 The first car was flagged off at 9am and the rest took off at an interval of 25 seconds from each other. The first four cars are running as endurance cars while the final one is being driven for efficiency.

All the cars will be driven around 24x7 with 2 hr 10 mins of track run before taking refuelling and tyre change intervals in pit stops. The first car in the line up, the Zest Revotron petrol driven by Adil Jal Darukhanawala, Editor-in-Chief, ZEEGNITION, was flagged off by G R Nagbhushan, head of engineering, passenger vehicles, Tata Motors Ltd at 9 am.

The second car, the Bolt Revotron petrol driven by formula LGB champion Armaan Ebrahim was flagged off by Sanjay Sharma, head of JK Tyre. "Im curious to know how the tyres will hold up through the first couple of stints and whether the engine will continue to impress us as it during our practice sessions," Armaan said before the start of the drive.

The Tiago Revotron petrol at number three driven by Sirish Chandran, Editor-in-Chief, Evo India magazine was flagged off by Anand Kulkarni, head of vehicle engineering, Tata Motors Ltd. Harish Samtani driving the Tiago revotorq diesel at number four was flagged off by Mr. Chidambaram, DGM-branding, Indian Oil Corporation Ltd. Sneha Sharma, one of the four women drivers, got behind the wheel of the Bolt tuned for fuel efficiency and targeted for maximum fuel efficiency run. Her car was flagged off by Manmohan Singh Kukreja, Chief Manager, retail sales, IOCL.

Barely 20 seconds after the last car was flagged off, the first car returned tearing down the track to clock its first lap. Excitement will continue to be the order of the day as the cars look to tumble several time, speed and distance records as they go round the speed bowl.

Watch this space for more updates.

(This is an advertorial piece)