In the end, Hazratullah Zazai’s third six of the evening, which was his team’s ninth, helped Bangla Tigers chase down the target of 90 in just 4.2 overs. 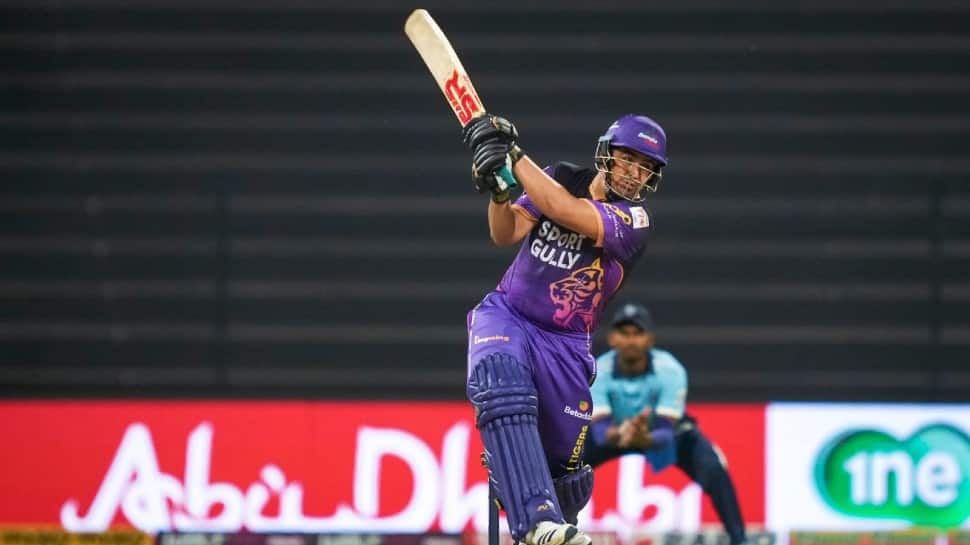 Bangla Tigers' Hazratullah Zazai in action against The Chennai Braves in an Abu Dhabi T10 League match.
Share:
Written By:

Bangla Tigers cruised to an easy nine-wicket win over The Chennai Braves in Tuesday’s (November 23) second fixture of the evening in the Abu Dhabi T10. Openers Johnson Charles and Hazratullah Zazai gave the team a blistering start, making the chase a walk in the park for Faf Du Plessis’ men.

In the end, Zazai’s third six of the evening, which was his team’s ninth, helped Bangla Tigers chase down the target of 90 in just 4.2 overs. Charles set the tone of the chase by striking The Chennai Braves’ opening bowler Munaf Patel for three sixes in the first over of the innings. His opening partner from Afghanistan, Hazratullah Zazai, was even more severe on Curtis Campher in the next over and smashed him for 26 runs, which included two sixes and three fours.

Roman Walker’s introduction to the attack did little to change the course of things for The Chennai Braves as Charles hit him for his fourth six to bring up the team half-century in just 2.1 overs. Walker gave away 21 runs in the over as the Bangla Tigers raced to 67 in their first three overs.

By the time Mark Deyal provided the breakthrough by removing Charles in the fourth over, it was too late for his team to make a comeback into the contest. Zazai, in the company of Will Jacks, ensured no further damage was done and took his team to their second win with an unbeaten 34 from 9 deliveries. Jacks contributed 14 from the five deliveries he faced.

Put into bat by Du Plessis, The Chennai Braves failed to make the most of the powerplay overs as James Faulkner removed Ravi Bopara while Bhanuka Rajapaksa lobbed a simple return catch to Luke Wood within the first three overs. Coming in at number four, captain Dasun Shanaka also failed to stabilise the innings and left his team tottering at 36 for the loss of three wickets at the halfway mark.

Angelo Perera and Samiullah Shinwari resurrected the innings with a 36 run partnership. However, just as it seemed that the duo would provide the final flourish to the innings, Perera fell to give Benny Howell his second wicket. Mark Deyal’s late cameo of 15 from 7 balls took The Chennai Braves to 90 in their 10 overs but it wasn’t to prove enough for the Bangla Tigers.