Team Abu Dhabi got off to a fantastic start in their first encounter of Season 5 of Abu Dhabi T10 against the Bangla Tigers at the Zayed Cricket Stadium in Abu Dhabi on Friday. 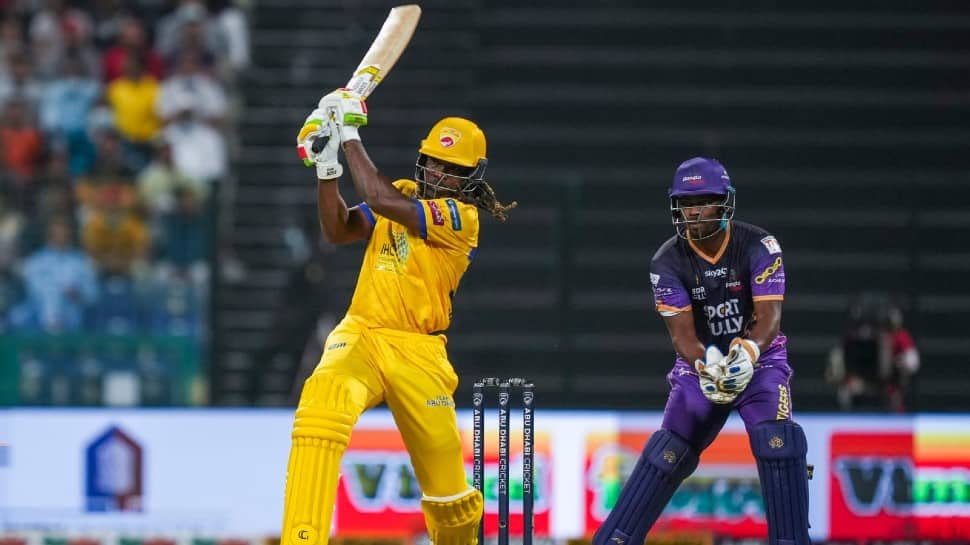 Andre Fletcher smacked Sheldon Cottrell for three boundaries and two sixes in the first over of the Tigers' innings. However, the Tigers suffered a massive blow when Marchant de Lange dismissed Captain Faf du Plessis for nought in the very next over.

Johnson Charles and Andre Fletcher smashed a six each, but the latter was bowled out for 24 runs (8 balls) on the last ball of the second over. Team Abu Dhabi put even more pressure on the Tigers when Captain Liam Livingstone removed Charles for 7 runs (4 balls) in the third over and thereafter Jamie Overton dismissed Will Jacks (1 run from 5 balls) leaving the Tigers at 43/4 in 3.3 overs.

Benny Howell and Hazratullah Zazai strung a partnership of 28 runs and took the Tigers to 71/4 in 6 overs, but De Lange tilted the match completely in favour of Team Abu Dhabi by dismissing three batters in the seventh over, leaving the Tigers reeling at 81/7. Thereafter, Team Abu Dhabi bowled three clinical overs and ensured that they walked off the field as winners.

Earlier, Philip Salt and Paul Stirling got Team Abu Dhabi off to a flyer by striking a six and a four in the first five deliveries of the first over of the match. However, Luke Wood pulled things back for Bangla Tigers after running out Salt on the last delivery of the first over.

Thereafter, Paul Stirling and Chris Gayle started the fireworks for Team Abu Dhabi. Stirling smacked Wood for two boundaries and a six in the third over and Gayle struck three sixes and a four off Sabir Rao's bowling in the fifth overtaking Team Abu Dhabi's score to 81/2 in 5 overs.

However, Team Abu Dhabi posted a mammoth total of 145/4 at the end of their 10 overs with Gayle remaining unbeaten on 49 runs from 23 balls.