Kohli was dismissed early, for a duck in the first match on Friday, as he tried to take on the England bowling early. However, he changed his game on Sunday (March 14) and was more cautious in his approach before opening up. 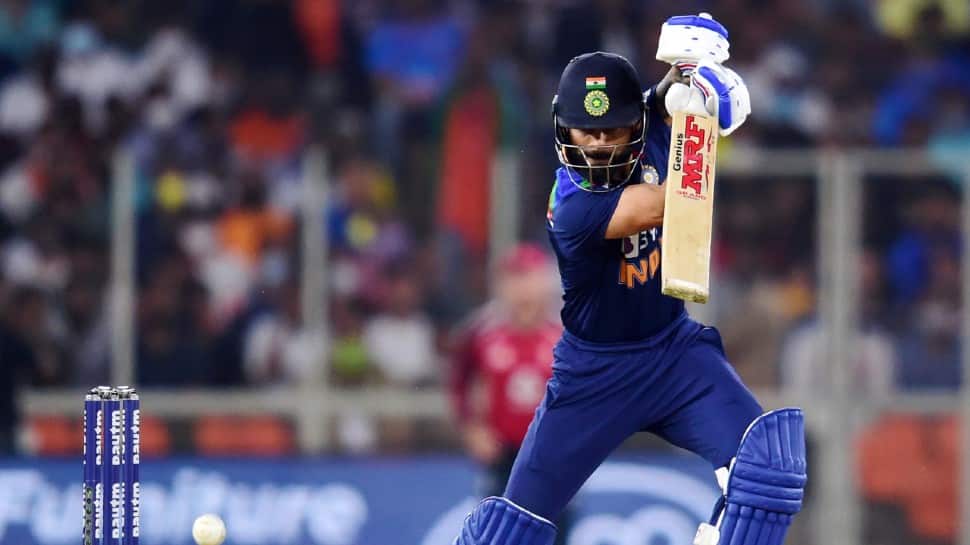 Indian skipper Virat Kohli returned to form with a fine fifty in the 2nd T20 against England. (Photo: PTI)
Share:
Edited By:

After a disappointing outing in the first match, India skipper Virat Kohli played a patient captain`s innings of 73 not out (off 49 balls) as young power-hitters Ishan Kishan and Rishabh Pant went after the bowling to help India bounce back in the five-match series with a seven-wicket win over England in second T20I here.

Kohli was dismissed early, for a duck in the first match on Friday, as he tried to take on the England bowling early. However, he changed his game on Sunday (March 14) and was more cautious in his approach before opening up.

“I had to shift the focus back to the basics. I’ve always taken pride in doing the job for the team. So more happy about that than scoring 70-odd. Kept my eye on the ball. The management spoke to me about things,” said Kohli after the match before crediting his knock to a piece of advice from South African batsman and his Royal Challengers Bangalore teammate AB de Villiers.

“I had a special chat with AB de Villiers before this game and he told me just to watch the ball. So I did,” added Kohli.

The India skipper was effusive in his praise of India’s bowlers as well as Kishan, who made a blistering 32-ball 56.

“It was quite a good game for us. I think we ticked all the boxes. Especially, in the first innings, with the ball. To give away only 34 (35) in the last five (overs), it was very smart bowling. Washy (Washington Sundar) had only one left-hander to bowl to and he used the big boundary to the right-handers better,” added Kohli.

“Special mention to Ishan. I tried to do what I could but he just took the game away from the opposition. Quality innings on debut. We`ve seen him hit international fast bowlers for big sixes (in Indian Premier League for Mumbai Indians). He knew he was hitting the ball well but he was calculated, not reckless. Today that counter-attacking innings of his and our partnership was something the team needed,” said Kohli.

The India No. 3 said that the pitch was a bit better to bat in the second innings as the ball was gripping less. But he also felt that England bowled a bit too short.

“It did get a bit better to bat in the second innings. The ball gripped a bit less. Having said that, they bowled too short -- it is probably not on, (especially) on that surface,” he added.

He also praised Hardik Pandya for returning to bowling. “Credit to Hardik that he is bowling at least three overs for us in every game. And for the next 6-8 months period, he has promised he is going to commit everything to being the all-rounder the team needs in all three formats... these kind of players are priceless.”