Australia won the toss and opted to bat first against India in the warm-up match of the ongoing ICC Men's T20 World Cup on Wednesday at ICC Academy Ground in Dubai. 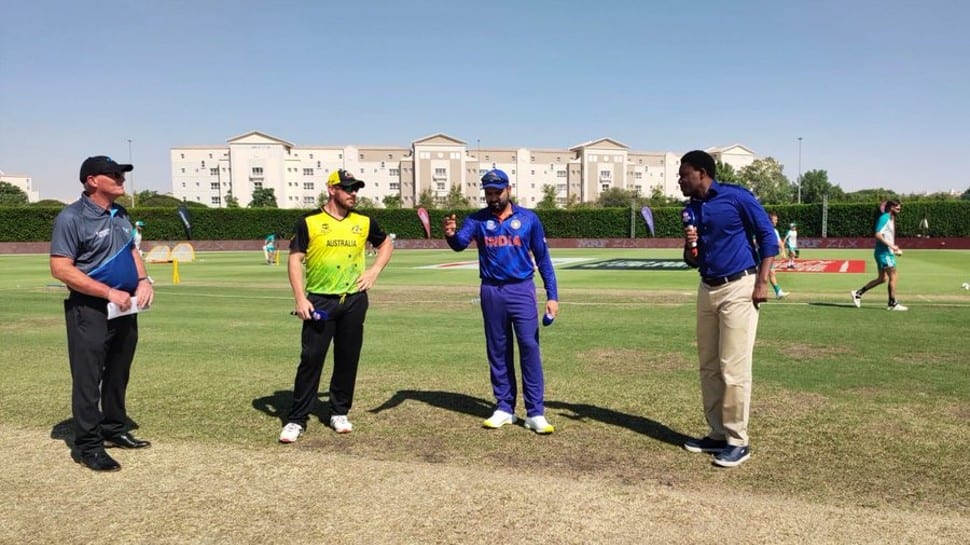 Rohit Sharma is leading Team India against Australia in the T20 World Cup 2021 warm-up match as regular captain Virat Kohli has decided to sit out. Also, Jasprit Bumrah and Mohammed Shami are resting.

Meanwhile, Australia won the toss and opted to bat first against India in the warm-up match of the ongoing ICC Men's T20 World Cup on Wednesday at ICC Academy Ground in Dubai.

Speaking at the toss, Australian skipper Aaron Finch said, "We will bat first. Batted second in the last game, so looking to change things up a bit. It's going very well at the moment. Josh Hazlewood is the only one who'll not take the field today. Mitchell Swepson and Josh Inglis aren't playing as well."

Australia have elected to bat against #TeamIndia. #INDvAUS #T20WorldCup pic.twitter.com/iJ3rvtHRoD

On the other hand, India stand-in skipper Rohit said, "Kohli, Bumrah, and Shami are resting today. We wanted to bat first as well, just wanted to try and get runs on the board. We want to make sure that we get the 6th bowling option, some options in the batting order as well, we'll try all those things today."

"Hardik is coming along pretty well, but it'll be a while before he will start to bowl. He hasn't started bowling, but he should be ready by the start of the tournament. We have quality in the main bowlers, but you need an option for a sixth bowler," he added.

On Monday, India defeated England by seven wickets in their first warm-up match. Chasing 189, India got off to an excellent start as opening batters KL Rahul and Ishan Kishan played crucial knocks of 70 and 51 runs, respectively.

After this match, India will next play Pakistan in their opening game of the T20 World Cup on October 24 while on the other hand, England will be facing West Indies on October 23.

In Group 2, India will then face New Zealand and Afghanistan, the emerging force in T20 cricket, plus the winners of Group B and runners-up from Group A.