It was the wicket-keeper batsman Matthew Wade who came in at number 7 but was dismissed after only being able to score 4 runs. 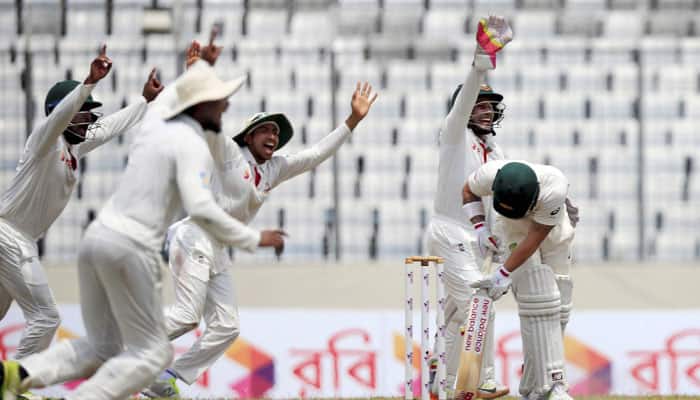 New Delhi: Bangladesh truly are learning the art of sledging from Australia and it was certainly visible on more than one incidents, one of which was Tamim Iqbal asking Matthew Wade to leave the field quickly after he was dismissed.

It was a rather tense moment considering the match's perspective, with both sides looking to snatch a win from the opponent's grip, though eventually, the hosts were able to secure a 20-run victory.

Chasing 265, Australia once looked on song to reach the target considering the form David Warner was in. The scoreboard read 158 for 2 before Shakib Al Hasan sent the left-handed opener packing on 112 and didn't take long to remove the Aussie skipper Steve Smith (37) to leave the visitors reeling at 171 for 4.

Another wicket in the form of Peter Handscomb followed, with Taijul Islam striking to reduce Australia to 187 for 5.

It was the wicket-keeper batsman Matthew Wade who came in at number 7 but was dismissed after only being able to score 4 runs. Seeing him leaving the field walking slowly, Tamim Iqbal approached and asked him to rush off the field as there is still business left to be done for the hosts.

Post match, Shakib spoke about the art of sledging that Bangaldesh were learning from Australia.

"Australians are very good at it, we are learning from them," ESPNcricinfo quoted Shakib as saying when asked about the verbal volleys. "After this Test match they will show a lot more respect."

During the course of the match, Shakib gave Australian off-spinner Nathan Lyon a send-off on the first day, while skipper Steve Smith and his deputy David Warner all reacted to the sledging at different points on Day Three and Four.