PM Modi speaks on the occasion of Foundation Day of ICAI in Delhi's Indira Gandhi Stadium: As it happened

Prime Minister Modi is addressing the public on Good Service Tax on the Foundation Day of Institute of Chartered Accountants of India at Delhi's Indira Gandhi stadium. 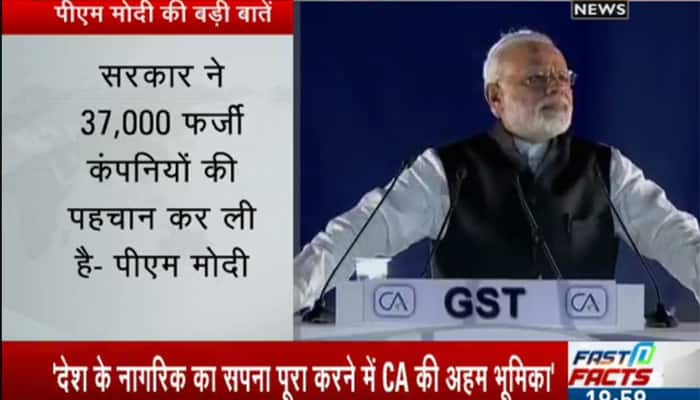 New Delhi: Prime Minister Narendra Modi addresses the chartered accountants and the general public on the occasion of Foundation Day of Institute of Chartered Accountants of India at Delhi's sprawling Indira Gandhi stadium.

In his speech, the prime minister highlighted his government's decision to roll out the Good and Service Tax and how it will help build a new economic system in the country.

- If you know anyone with black money, warn them that they would not be spared, PM Narendra Modi to CAs: PTI

- Impact of our steps to check black money is clear from latest figures of Swiss banks, where Indians' money has dipped to record low, says PM

- PM exhorts CAs to take charge of bringing their clients to path of honesty; says a wrong audit can impact lives of gullible investors: PTI

- People get electricity in their homes with the taxes paid by people, says PM Modi

- Your signature is more powerful than PM's and the government also believes the accounts signed by you: PM Modi tells CAs.

- Your signature carries immense faith, please do not break that trust that is placed on you, PM Modi tells Chartered Accountants

Also Read: 'GST roll-out will create one lakh jobs in next three months'

- PM Modi asks CAs why action has been taken against only 25 of them for irregularities, while over 1,400 cases are pending for many years.

- We will always remember how the community of professionals took a lead during the freedom struggle of India: PM Modi

- Only 32 lakh people in our country declare their income in excess of Rs 10 lakh: PM Modi

- Demonetisation was a necessary step against corruption, black money; we will take action against shell companies: PM

- Our Government has taken a tough stand against those who have looted the nation, says PM

- On one hand, there is a Swachh Bharat Abhiyaan and there is a movement to clean the nation from the menace of corruption: PM

- Govt has cancelled registration of over 1 lakh companies and more than 37,000 shell firms have been identified for strong action, says PM: PTI

- Impact of our steps to check #blackmoney is clear from latest figures of #Swiss banks, where Indians' money has dipped to record low, says PM Modi: PTI

- There lakh firms have come under suspicion, at least 1 lakh have been shut; 37,000 shell companies have been identified, says PM Modi

- There have been 45% decrease in Swiss bank in last three years: PM Modi