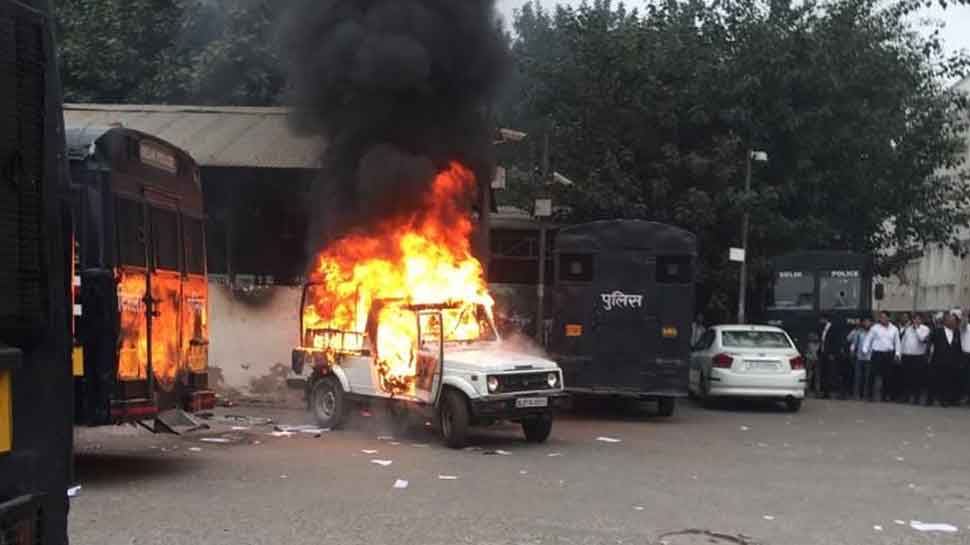 NEW DELHI: A major scuffle broke out between the policemen and lawyers at Delhi's Tis Hazari Court on Saturday in which one person was injured.

Gunshots were also heard during the scuffle and several government vehicles, including a police jeep, were set on fire by the agitated lawyers.

Delhi: A scuffle has broken out between Delhi Police and lawyers at Tis Hazari court. One lawyer injured and admitted to hospital. A vehicle has been set ablaze at the premises. More details awaited. pic.twitter.com/8wrvNXuLLT

According to immediate reports, several people sustained minor injuries in the incident. One of them, a lawyer, has been admitted to St Stephen's Hospital.

The scuffle broke out when members and workers of the Indian Youth Congress were protesting outside the residence of Union Minister Giriraj Singh against Regional Comprehensive Economic Partnership (RCEP) and the inclusion of dairy sector in RCEP.

Delhi: Members and workers of Indian Youth Congress protest outside the residence of Union Minister Giriraj Singh against Regional Comprehensive Economic Partnership (RCEP) and the inclusion of dairy sector in RCEP. pic.twitter.com/BjROT7ZpqB

However, some other reports said that a parking dispute triggered the clash, but it is yet to confirmed by the Delhi Police.

The police also resorted to firing in which one lawyer was reportedly injured. The lawyers have accused the police of firing at them over a petty issue.

Additional forces were sent to the Tis Hazari Court to bring the situation under control.

In view of the tense situation, the police locked a few gates to prevent miscreants from entering the court premises.

Fire tenders were also rushed to the spot.

In the wake of the incident, the Bar Council of India has called for a lawyers' strike across district courts in Delhi on November 4.

Mahavir Sharma, Chairman and Dhir Singh Kasana, Coordination Committee Secretary-General, Bar Council of Delhi said that one lawyer was injured when police personnel opened fire at a group of advocates and several other advocates and a journalist were injured in the scuffle.

"We strongly condemn brutal unprovoked attack on lawyers by police at Tis Hazari Court. One lawyer is critical. A young lawyer was beaten up in the lockup. This is high-handedness of police and they should be dismissed and prosecuted. We stand with Delhi lawyers," KC Mittal, Chairman, Bar Council of Delhi said.

National Spokesperson of Congress Abhishek Manu Singhvi also reacted to the incident that happened at the Tis Hazari Court and said that legal recourse should be taken.

"Really disturbed by the instance of Tis Hazari Court in which a conflict between police and lawyers turned ugly. Since my sources tell me that a lawyer was shot, anger within legal fraternity is justified but not violence. Let`s hope the legal recourse is taken," he tweeted.