Finance Minister Piyush Goyal is presenting the NDA government's last Budget. Coming just a few months ahead of the Lok Sabha elections, the Interim Budget is likely to focus majorly in the Agriculture, banking, real estate sectors and the Railways. 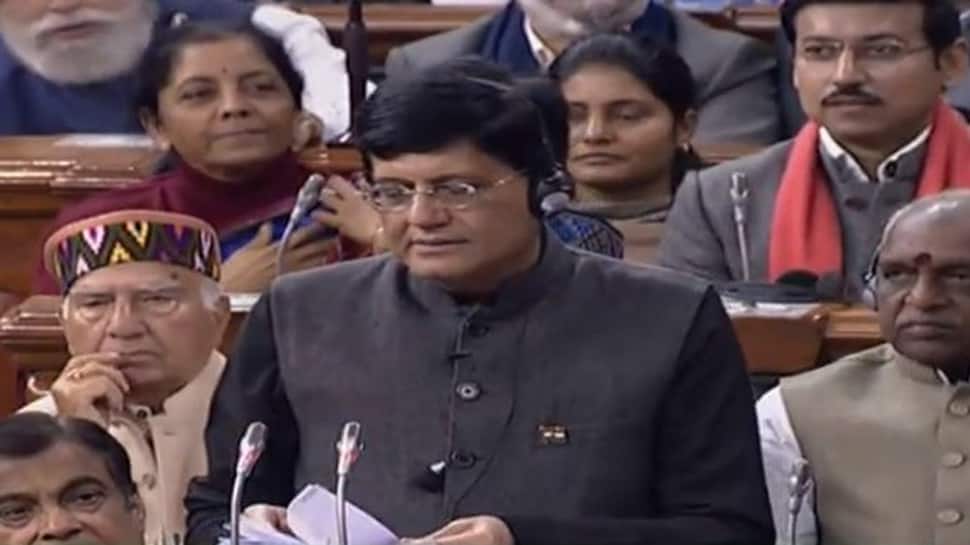 NEW DELHI: Finance Minister Piyush Goyal is presenting the NDA government's last Budget. Coming just a few months ahead of the Lok Sabha elections, the Interim Budget is likely to focus majorly in the Agriculture, banking, real estate sectors and the Railways.

While addressing the all-party meeting, Prime Minister Narendra Modi had on Thursday said that the government’s focus lies on finding solutions to problems of people. "The country expects from all of us to perform our duties as Parliamentarians in a positive manner and we must deliver to the expectations of the people," he said.

Here are the highlights of Piyush Goyal's Budget Speech:

# Piyush Goyal: Benefits under Sec 80(i)BA being extended for one more year, for all housing projects approved till the end of 2019-2020. This is not just an Interim Budget, this is a vehicle for the developmental transformation of the nation.

# Piyush Goyal: Benefit of rollover of capital tax gains to be increased from investment in one residential house to that in two residential houses, for a taxpayer having capital gains up to 2 crore rupees; can be exercised once in a lifetime

# Piyush Goyal: Individual taxpayers earning upto Rs 5 lakh will have have to pay any income tax rebate. Those who have gross income upto Rs 6.5 lakh also will not have to pay any tax if investments are made upto Rs 1.5 lakh. Standard tax deduction for salaried persons raised from Rs 40,000 to Rs 50,000.

# Piyush Goyal: Vision 2030 for India's development in the next 10 years. This includes 10 main vision points - 1) building next-gen infrastructure; 2) building stronger digital India; 3) Making India a clean and pollution free, India will lead the world in transport revolution; 4) Expanding rural industrialisation to ensure massive employment; 5) Clean rivers; 6)  Oceans and coastlines is the sixth dimension of our vision for 2030; 7) India's Space programmes, India aims to become launchpad of the world, placing an Indian astronaut in space by 2022; 8) Making India self sufficient in food; 9) Healthy India, with distress-free and comprehensive wellness system for all; 10) Minumun Government Maximum Goevrnance with proactive and responsible bureaucracy, electronic governance is the 10th dimension of our vision for India for 2030.

# Piyush Goyal: GoM is deliberating how to help home buyers and reduce their GST tax burden

# Piyush Goyal: Tax collection increased significantly to almost 12 lakh crore this year. Thank the honest tax payer for their contrutions. We want to ensure people that their money has been used for the upliftment of the poor.

# Piyush Goyal: Entertainment industry is a major employment generator. We are working to amend Acts to ensure the end of piracy.  We recently watched 'Uri'. It was much fun and had 'josh'.

# Piyush Goyal: Aadhaar is now universally implemented which has helped in limiting corruption by middlemen.

# Piyush Goyal: India is leading the world in consumption of mobile data. The data consumption has increased by at least 50% in the last 4 years. This has also generated employment. We aim to establish 1 lakh digital villages in the coming year.

# Piyush Goyal: Rs 64,587 crore allocated for Railways. Overall capital investment also is a historic Rs 1,58,658 crore for the 2019-2020. Vande Bharat Express will provide speed, service and safety to citizens and will give a boost to Make In India

# Piyush Goyal: More than 100 operational airports, domestic air travel has more than doubled in the past 4 years.

# Piyush Goyal: We had promised OROP in our election manifesto. We have disbursed over Rs 35,000 crore after implementing the scheme in true spirit. The govt has also announced substantial hike and additional allowances for armed forces. It is for the first time that we announced Rs 3 lakh crore for Defence Budget, if needed we will increase this further.

# Piyush Goyal: Job seeker now a job creator. India has become the second largest hub of start ups. In order to take the benefits of artificial intelligence, a special programme has been envisaged by the government. Nine priority areas have been identified for the same.

# Piyush Goyal: Mega pension yojna launched. Under this, it will benefit people earning upto Rs 15000. Named Pradhan Mantri Shram Yogi Mandhan, it will provide assured monthly pension of Rs 3000 per month, with contribution of Rs 100 per month, for workers in unorganized sector after 60 years of age

# Piyush Goyal: All farmers affected by severe calamities will be provided relief on interest by upto 5 per cent

# Piyush Goyal: Rashtriya Kamdhenu Aayog to be set up for the upgradation of cow resources. This government will not leave any stone unturned to respect the cows and work for their welfare

# Piyush Goyal: 12 crore families will benefit from the scheme. The  government expenditure on account of this scheme will be Rs 75000 crore per annum.

# Piyush Goyal: Farmers were not getting full return of their investments in the past years. For the first time in history, this government set up the MSP which was at least 50% more than the expenditure of the farmers.

# Piyush Goyal: We have given a major uplift in public healthcare. Ayushman Bharat, launched with an aim to provide medical care to nearly 50 crore people, has resulted in 3,000 crore savings by families of poor sections. 21 AIIMSs are operating or being established, 14 of these have been announced since 2014. Now the 22nd AIIMS will be set up in Haryana

# Piyush Goyal: We have worked to bridge the urban-rural divide. From empty promises in the past, targeted expenditure has been undertaken to improve the quality of life in villages; we aim to bring development, preserving the soul of villages. Construction of rural roads has been tripled under the pradhan mantri gram sadak yojna

# Piyush Goyal: Over 5 lakh villages have been declared open defecation free. This is no longer a government scheme but a public initiative. We want to thank the people of the country for this initiative.

# Piyush Goyal: Defaulting managements are now either paying or leaving their businesses. To restore the health of banking sector, recapitalization amounting to 2.6 lakh crore has been done. Confident that given the pace of reforms in banking sector, other banks too will recover:

# Piyush Goyal: farmers income have doubled. Fiscal deficit has been brought down to 3.4% in the revised estimate of 2018-19.

# Piyush Goyal: We are the fastest growing major economy in the world today. Besides generating high growth rate we have contained double-digit inflation.

# Piyush Goyal: India is solidly back on track. We have prepared the foundation for better growth of life and marching towards growth and prosperity

The Finance Minister, Shri @PiyushGoyal after giving Final touches to the Budget 2019-20 in his office in North Block today, interacting with Members of his Budget Team. Both the Minister of State for Finance,Shri @BJPShivPShukla and @PonnaarrBJP were also present on the occasion pic.twitter.com/oOTPwYzbpO

The Budget session of Parliament will have 10 sittings spread over 14 days. Union Minister of Parliamentary Affairs, Rural Development, Panchayati Raj and Mines Narendra Singh Tomar on Thursday told media persons that the Interim Budget Session of Parliament, subject to exigencies of Government Business, may conclude on February 13, 2019.

Interim Budget 2019: When and where to watch Budget speech and reactions on Zee Business