Recently, a newspaper clipping from Shah Rukh Khan's iconic movie 'Main Hoon Na' has gone viral on the internet. Check out the reason behind its popularity. 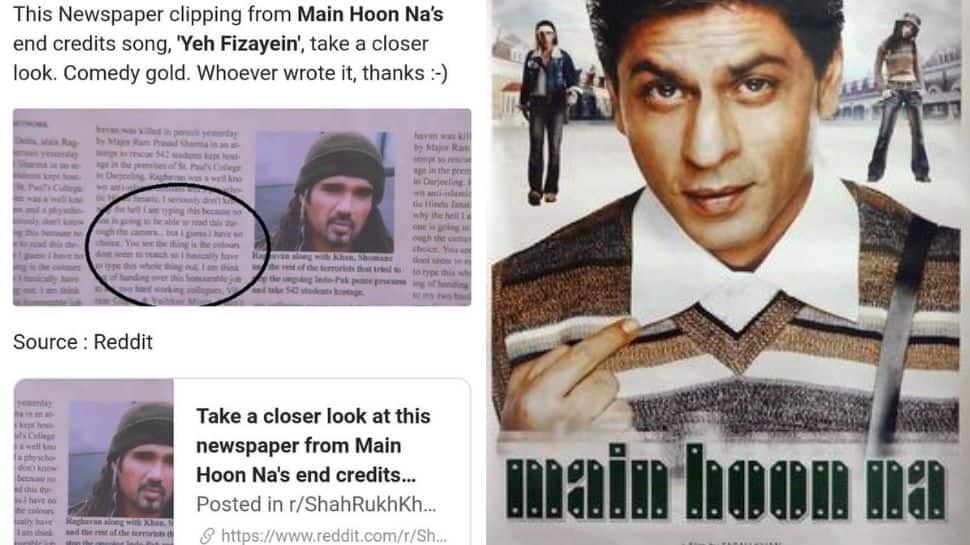 New Delhi: Remember the iconic film 'Main Hoon Na'? We're sure you do, it was one of the most popular films in the 2000s starring Shah Rukh Khan, Sushmita Sen, Zayed Khan and Amrita Rao in lead roles. The film is making headlines again but you'll never guess the reason! A few days ago, a Bollywood buff on Reddit came across the end credits song in the film titled 'Yeh Fizayein' and took a closer look at the details of the song.

What they found was an interesting newspaper clipping in the video that largely went unnoticed but had some very interesting and hilarious text written in it. In the song, while everyone is dancing rejoicing in the happy ending, for a few seconds, we're shown a newspaper clipping of Suniel Shetty's character Raghavan's death (He played the villain in the movie).

Surprisingly, the paragraph written in the clipping was a huge rant written by the person responsible for handling that bit. The picture shared on the Reddit page BollyBlindsNGossip gave us a glimpse of the hilarious text which read, "I seriously don't know why the h*** I'm typing this because no one is going to be able to read this through the camera. You see the thing is that the colours don't match so I basically have to type this whole thing out. I am thinking of handing over this honourable job to my two hardworking colleagues, Vikram Gupta and Vaibhav Misra."

Things I wake up for/to... pic.twitter.com/E3oePKp9gW

On the work front, Shah Rukh was last seen in 'Zero' by Aanand L Rai co-starring Anushka Sharma and Katrina Kaif. After a long hiatus of three years, SRK will be seen in Pathan - the film which features Deepika Padukone and John Abraham.

Netizens come across Shilpa Shetty's husband Raj Kundra's book 'How Not To Make Money', point out the 'irony'!