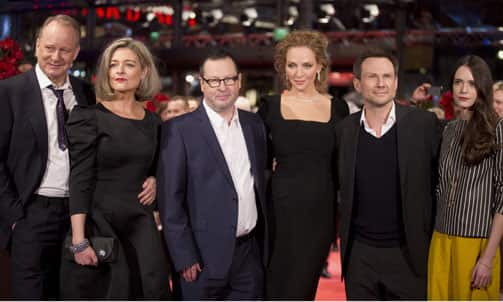 Berlin: Danish director Lars von Trier premiered a "director`s cut" of `Nymphomaniac` at the Berlin film festival on Sunday, but stayed away from the media on a day that also saw the premiere of a film about strict Catholicism`s impact on a teenage girl.

Von Trier`s film starring young actress Stacy Martin and a long list of actors as her sexual partners, drew long queues to cinemas, even though it is being shown out of competition for the festival`s top prize to be awarded next Saturday.

Charlotte Gainsbourg appears in the second volume of the extended version of the film, which will not be shown in Berlin.

Von Trier appeared with his cast for a photo shoot, wearing a T-shirt that said "persona non grata" - an apparent reference to his having been asked to leave the Cannes film festival three years ago after saying that Hitler had had some good ideas. As has been his custom since then, he did not attend the news conference.

Asked if the director had been able to make the films he wanted, producer Louise Veth said: "Yes he has done what he wanted to until now so let`s hope that it will continue.

"Of course this, with a sex topic, made it a little difficult because of public rules. Sex is more difficult than violence - I don`t know why but that`s how it is."

The pairing of the Danish director`s steamy opus with the German-made `Kreuzweg` ("Stations of the Cross") about a Catholic family bringing up their daughter in a strict religious environment, made for an odd juxtaposition, but one the film`s director, Dietrich Bruggemann, seemed to relish.

"OUR RELIGION IS CINEMA"

"Our religion is cinema and this is the cathedral and that`s what you do on Sunday. first you go to church service and then you have some fun," Bruggemann told a news conference.

"Fun" would certainly not be a word for Bruggemann`s harrowing film which shows a charming, pretty and bright young girl`s descent into self-loathing, self-doubt and eventually anorexia in a deeply religious German Roman Catholic family.

She is torn between the teachings of her priest, played by Florian Stetter, who at catechism class tells teenagers that rock and soul music are instruments of Satan and that "impurity is the major sin of our time", and the attentions of a boy who invites her to choir practice in a more liberal parish.

Maria, played by Lea van Acken, is attracted to the boy, but also thinks music might help her autistic brother, who has yet to speak a word at the age of four.

Her stern and fanatical mother, played with Cruella de Vil panache by Franziska Weisz, forbids it, even if most of the music is Bach, because some of it is soul and gospel.

The confrontation between Maria, who is ostracised at her local school for her extreme religious views, and her domineering mother escalates, with devastating consequences.

Bruggemann said he and his sister Anna, who wrote the screenplay with him, were raised as Catholics and while their family was not radical, he had come to know that extreme versions existed, not just in Germany but elsewhere.

"If you go to the States all you hear is religion and preaching," Bruggemann told a news conference. "The question was what happens if ideology takes first place?"

The film follows the stations of the cross, with Maria cast in the role of a female Jesus, and for the most part the camera stays still throughout each scene, leading to long passages for the actors and actresses to play without muffing their lines.

`Nymphomaniac` follows sex-addicted Joe, played by Martin in this film and by Gainsbourg in the sequel, on an odyssey of self-discovery that explores love, death and loneliness.

Asked whether it was difficult acting in such a graphic film, Martin paid tribute to von Trier`s qualities as director. "He is very trusting, he made the job very easy," she said.

Stellan Skarsgard, who has often worked with von Trier and in this film plays a father confessor figure to whom Joe recounts her life, echoed her comment, adding: "Lars is a very funny man."

While von Trier stayed away from the news conference, Shia LaBeouf, who has starred in the `The Transformers` movies and in `Nymphomaniac` plays one of Joe`s lovers, caused a stir.

Asked how it felt to perform such sexually explicit scenes, LaBeouf took an oblique swipe at journalists, suggesting they were like "seagulls following the trawler to get sardines". He then walked out.