Bruno Lage, who did not play football professionally and has never previously coached a top-flight side in Europe, was initially appointed as a stop-gap after Rui Vitoria left the club by mutual consent on January 3. 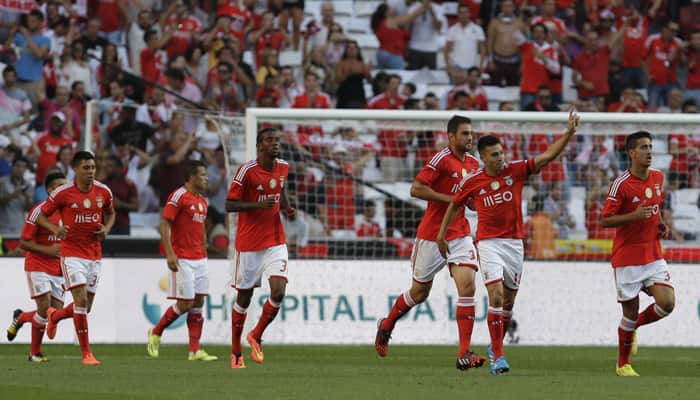 Benfica`s interim coach Bruno Lage has been given the job on a permanent basis, club president Luis Filipe Vieira said on Monday.

The 42-year-old, who did not play football professionally and has never previously coached a top-flight side in Europe, was initially appointed as a stop-gap after Rui Vitoria left the club by mutual consent on January 3.

Benfica have won both their games under Lage`s leadership, lifting them to second in the Portugal`s Primeira Liga and cutting the gap between themselves and leaders Porto to five points.
His lack of experience in senior coaching did not worry Vieira.

"The first choice is the gentleman by my side," Vieira told a news conference, sitting next to Lage. "He identifies with this club, he knows what Benfica is all about and he knows our aims and objectives."

Vieira added that he had never contacted any other coaches, or their agents, about the job despite media reports to the contrary. "I don`t know where that story came from," he said.

Former Porto and Manchester United coach Jose Mourinho had been one of the names linked with the role in his home country but he ruled himself out of the running last week.

Lage began his career 20 years ago when he joined the coaching staff at Vitoria Setubal and worked at several small clubs before being appointed youth team coach at Benfica in 2004, a job he held for eight years.

He also worked as assistant to Carlos Carvalhal at English clubs Sheffield Wednesday and Swansea City before returning to Benfica last year to coach the B team.

"My dream at the start of my career was to be a physical education coach and fitness trainer," he told reporters. "Then I got the Benfica juniors job, Dubai, England... it was a natural course of events. I am very proud to have got to this point."

Benfica have won a record 36 Portuguese league titles and were European champions in 1961 and 1962.

They went on to play in eight more European finals and lost them all, a run of failures which some blame on the so-called "curse of Bela Guttmann."

Guttmann was the Hungarian coach who led Benfica to their two European Cup wins, but on leaving the club in acrimonious circumstances, he declared, "Benfica will not win another European final without me."