Daniel Ginczek`s late winner secured the points after Augsburg`s Tin Jedvaj had cancelled out Renato Steffen`s first-half opener as both teams returned to action after a two-month stoppage. 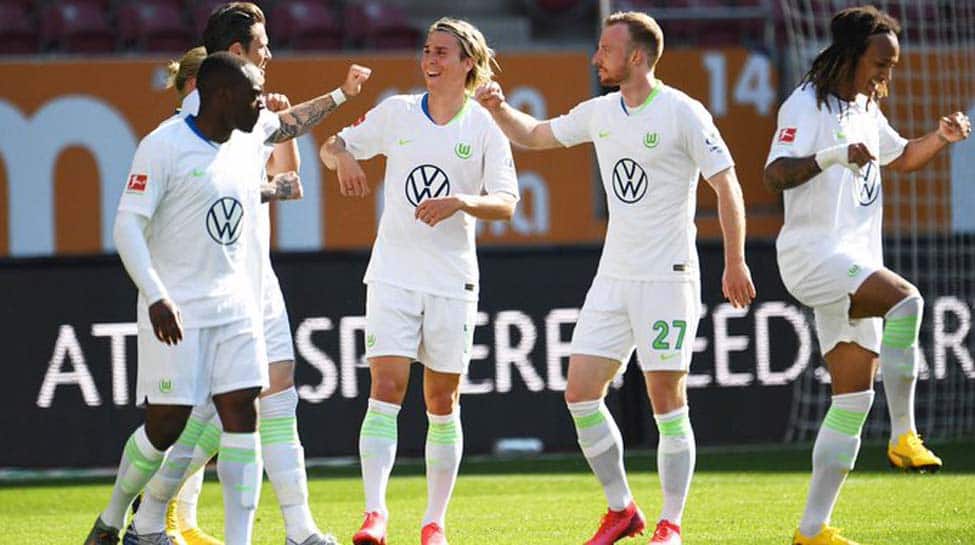 Wolfsburg scored a stoppage-time winner to beat Augsburg 2-1 and stretch their unbeaten Bundesliga run to seven games, moving up to sixth in the standings as the season restarted on Saturday inside an empty Augsburg Arena.

Daniel Ginczek`s late winner secured the points after Augsburg`s Tin Jedvaj had cancelled out Renato Steffen`s first-half opener as both teams returned to action after a two-month stoppage due to the coronavirus outbreak.

Augsburg were playing without their new head coach Heiko Herrlich on the sidelines as he was not allowed to attend the match after breaking quarantine by leaving the team hotel to buy toothpaste.

"We are very happy that after such a long period we could restart with a win," Wolfsburg boss Oliver Glasner told reporters.

"Obviously scoring in stoppage time was a bit lucky. We were the more dangerous team over 90 minutes... We had the game under control."

Winger Ruben Vargas went close to giving Augsburg the lead with a low shot that nearly caught out goalkeeper Koen Casteels, but his initial block slowed the ball down enough for him to claw it back before it crept over the line.

At the other end, Wolfsburg`s players appealed for a penalty when Jedvaj`s attempted clearance inside the box hit his arm.

Wolfsburg took the lead two minutes before halftime when Steffen used the pace of a cross to head home from 15 metres out, giving diving keeper Andreas Luthe no chance to make a save.

The players did not celebrate as a group as part of social distancing protocols, but they could not resist the urge to give the Swiss a couple of high-fives and fist bumps.

The home side equalised from a second-half set piece when John Brooks` headed clearance went the wrong way, came off goalkeeper Casteels` hands and hit the bar before bouncing on the line where Jedvaj was on hand to head home.

Felix Uduokhai thought he had given Augsburg a 2-1 lead when he headed home from another set piece but the referee looked at the pitchside VAR monitor and ruled it out as Florian Niederlechner was offside and blocking the goalkeeper`s view.

However, the visitors capitalised in stoppage time when Kevin Mbabu`s low cross found substitute Ginczek inside the six-yard box and his poacher`s finish at the far post gave the visitors all three points. Augsburg remain in 14th place.

"After Augsburg`s goal was disallowed, we upped the pressure, I liked that," Glasner added.

"Such a win is as good as in a full stadium. Obviously you want to celebrate with fans. There was joy but we need to be disciplined."