Chelsea hold on against Lille to advance in Champions League

Chelsea, who needed a victory to make sure of qualification, had gone five Champions League games at Stamford Bridge without a victory. 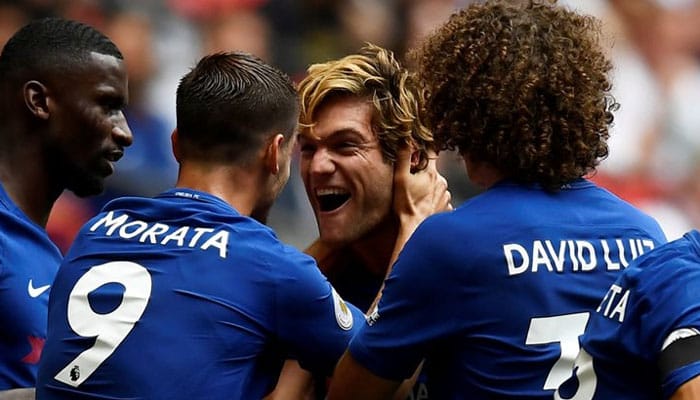 Chelsea survived a nerve-jangling finale to their 2-1 win over Lille on Tuesday, eventually holding on to clinch a place in the Champions League knock-out stages thanks to first-half goals from Tammy Abraham and captain Cesar Azpilicueta.

Chelsea, who needed a victory to make sure of qualification, had gone five Champions League games at Stamford Bridge without a victory, their longest such run at home in the competition.

They dominated almost the entire game yet Lille, who were already condemned to the bottom spot of Group H and fielded an under-strength side, scored in the 78th minute and came close to a late equaliser that would have eliminated Chelsea.

Victory left Chelsea second in the group on 11 points behind Valencia, who won 1-0 at Ajax Amsterdam, consigning the Dutch champions to third place and elimination. Lille ended with just one point.

"It did get twitchy," Chelsea coach Frank Lampard said. "We need to take our chances better. At 2-0, I thought it was not quite done and when Lille scored it made it a more nervy finish to the game than it needed to be."

After dominating the opening proceedings in a downpour and swirling wind, Chelsea went ahead in the 19th minute when U.S. striker Christian Pulisic darted forward to feed Willian and the Brazilian`s cut-back cross was turned in by Abraham.

The Londoners doubled their lead in the 35th minute when Azpilicueta shook off his marker to score with a close-range header from a corner by Emerson.

But what had looked like being a comfortable night for the Blues proved anything but once former Chelsea striker Loic Remy pulled a goal back for Lille with his shot going in off the underside of the bar.

Remy then wasted a chance to equalise when he shot straight at Chelsea goalkeeper Kepa Arrizabalaga in injury time.

Lille coach Christophe Galtier said his team had struggled in the opening 30 minutes to cope with Chelsea and the heavy rain and wind that swept around Stamford Bridge.

"Chelsea seemed to play a bit less in the second half. We got more of the ball and we deserved to get our goal," he said. "It made the match more interesting than what went before it. We could have scored a second goal."

The result meant all four English teams in this season`s Champions League - Liverpool, Manchester City and Tottenham Hotspur, as well as Chelsea - have reached the last 16 of the competition.

There was further good news for Chelsea as they welcomed back central defender Antonio Rudiger who had previously played only 45 minutes this season due to injuries.