Ronaldo followed up last week`s brilliant bicycle kick against Juventus with a poacher`s finish at the Santiago Bernabeu but Griezmann`s strike keeps Atletico in pole position to finish second in La Liga. 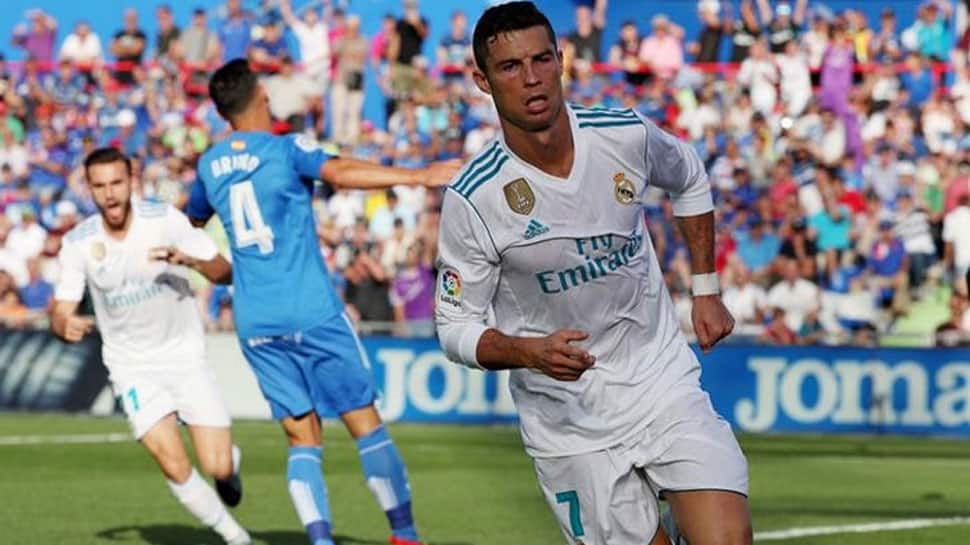 Madrid: Cristiano Ronaldo`s 24th goal in 15 games for Real Madrid this year was not enough to earn his side a derby victory on Sunday as an Antoine Griezmann equaliser secured Atletico a 1-1 draw.  Ronaldo followed up last week`s brilliant bicycle kick against Juventus with a poacher`s finish at the Santiago Bernabeu but Griezmann`s strike keeps Atletico in pole position to finish second in La Liga.

They retain their four-point cushion over Real while this was perhaps the perfect result for leaders Barcelona, who are now 11 points clear at the top.  It not only tightens Barca`s grip on the title but will likely bring forward the point when the Catalans are mathematically certain to be champions, with the `Clasico` still a possible coronation day on May 6.

Griezmann`s goal came on his 200th appearance for Atleti while Ronaldo`s was the 500th in the 161 league matches played between these two city rivals. In comparison to recent versions of this fixture, which have included Champions League finals, Cope del Rey finals and league games with both sides vying for the championship, this at times had a rather low-key feel.

Real coach Zinedine Zidane, with one eye on the Champions League quarter-final second leg against Juventus on Wednesday, started with Luka Modric and Karim Benzema on the bench, the latter coming on to spare Ronaldo the final half an hour. Gareth Bale was given 90 minutes, perhaps not the most positive indicator for his chances of a start in midweek. The Welshman supplied the cross for Ronaldo`s equaliser but, in truth, he was quiet for long periods here, a pale shadow of his confident, marauding best.

Bale`s early glancing header found Ronaldo free at the back post but from five yards the Portuguese lacked his usual ruthlessness and hit the excellent Jan Oblak. The best of a handful of dubious penalty claims followed, with Juanfran bringing down Toni Kroos after the German was quickest to the ball. Referee Xavier Estrada Fernandez waved away the swarm of white shirts rushing towards him.

Real had several openings around the penalty area but a combination of poor finishing and strong blocks, from Oblak in particular, kept them at bay. Atletico looked threatening on the break and Diego Costa could have scored when set free by a superb Koke pass but the striker, ignoring Griezmann in the middle, saw his angled finish tipped around the post.

After a period disrupted by niggling fouls and loose touches, Real finished well before the break as Marcelo`s curving shot rattled the crossbar and Dani Carvajal`s fired follow-up again met Oblak.  A game that looked in danger of drifting towards a stalemate sparked into life after half-time with two goals in four minutes.

Ronaldo scored the first as Bale`s hanging cross was misjudged by Lucas Hernandez at the back post, allowing the striker to volley in his 23rd league goal of the season. But Atleti were soon level. Griezmann slipped in Lucas and then continued his run so he was perfectly placed to slide home the rebound after Keylor Navas had parried.

Real were more aggressive in the search for a late winner but Atleti dug in. Bale almost had it but put a difficult header wide, while Sergio Ramos nodded past from a corner and saw his curling free-kick tipped over by Oblak. If only Ronaldo had still been on the field to take it.