Saints came into the contest having picked up four points in their last two Premier League away games, and found themselves in front after 11 minutes through James Ward-Prowse`s penalty. 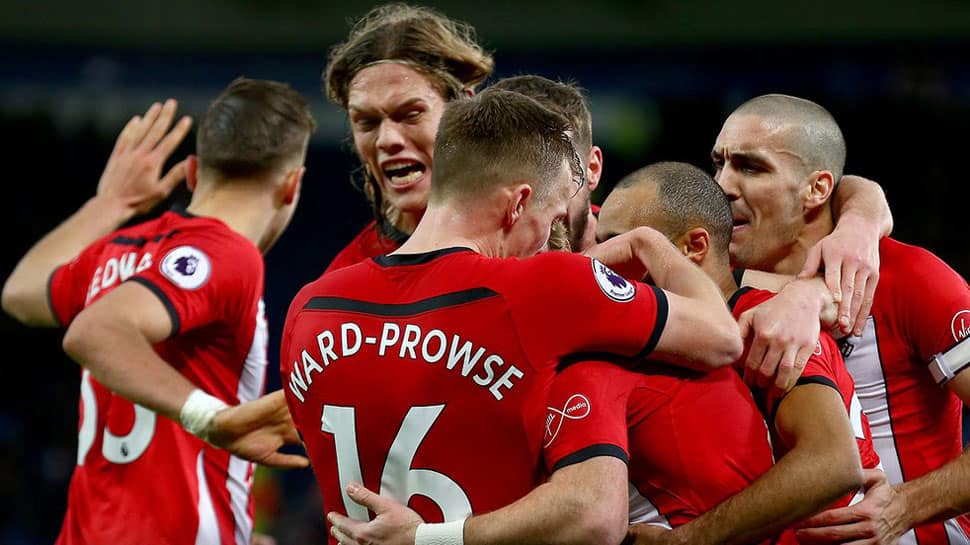 Southampton moved out of the relegation zone with a 2-1 win over Leicester City in the Premier League on Saturday despite playing half the match with 10 men at the King Power Stadium.

Saints came into the contest having picked up four points in their last two Premier League away games, and found themselves in front after 11 minutes through James Ward-Prowse`s penalty.

Their task was seemingly made more difficult when Yan Valery was sent off for a second yellow card just before halftime but Shane Long squeezed the ball home to double Southampton`s advantage just before the break.

Leicester committed more bodies forward in the second period and soon got themselves back in the match through Wilfred Ndidi`s scrappy goal in the 58th minute.

No team has given up more points from leading positions than Southampton this season, but they dug in and held out for another three crucial points.

The win moves Southampton up to 16th while Leicester followed up their humiliating FA Cup defeat by League Two side Newport County with a loss that sees them drop to eighth.

Despite beating Chelsea and Manchester City over the festive period, Leicester fans continued to voice their disapproval of manager Claude Puel, with signs held aloft demanding that he be sacked which the Frenchman said did not affect him.

"It`s not my concern (fan protests), no comment," Puel said. "I`m just focused and concentrating on my team.

"I want to work with these players. It`s football. The fans are like us - disappointed and frustrated."

That 2-1 defeat at fourth-tier Newport County in the FA Cup third round last weekend intensified the pressure on Puel and the boos rang out when Nampalys Mendy brought Long down in the penalty area, leaving Ward-Prowse to convert the spot kick.

Jan Bednarek then did brilliantly to clear the ball off the line before his fellow defender Valery earned a second yellow card for pulling down Marc Albrighton.

Long, though, raced clear down the left before sneaking the ball under Leicester goalkeeper Kasper Schmeichel to score only his third goal in his last 63 appearances for Southampton.

Puel made two changes at the break and it seemed to rejuvenate the hosts, with Ndidi getting Leicester back in the contest after being picked out by Ricardo Pereira.

The hosts created several openings against the 10 men, with Jamie Vardy heading their best chance wide, as the boos again came booming down from the stands at the final whistle.

"To be manager of this team, it`s a fantastic job," Southampton manager Ralph Hasenhuettl said. "Today they showed their quality. To go 2-0 in the lead at Leicester is not easy and we defended with fantastic commitment."