Former Napoli coach Carlo Ancelotti has been roped in as the new manager of the Premier League club Everton in a four-and-a-half-year deal, which will run until the end of the 2023-24 season. 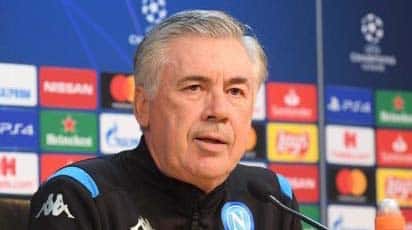 Former Napoli coach Carlo Ancelotti has been roped in as the new manager of the Premier League club Everton in a four-and-a-half-year deal, which will run until the end of the 2023-24 season.

Announcing the news, Everton’s Director of Football Marcel Brands said that the 60-year-old is one of the finest managers in the world of football and that it is pleasure to have him on board.

“Following a rigorous process conducted by all of our Directors, it is a pleasure to now welcome Carlo Ancelotti to Everton. He is one of the finest managers in world football and a proven winner, having achieved a remarkable level of success in each of Europe’s major leagues," the club's official website quoted Brands as saying.

Brands further stressed that Carlo has proven time and again that he knows how to build a trophy-winning side and, therefore, the club is really looking forward to work with him.

“He is the perfect appointment for us. He embraces our vision for the Club and we are sure that his enthusiasm to take the helm at Goodison together with his tactical abilities and well-renowned man-management will make him successful in this role. This was a clear and exciting decision for the Board to make. It was a unanimous choice and one we were all fully united behind throughout. Carlo has proven time and again, he knows how to build a trophy-winning side and we share the excitement of our fans at the prospect of him leading our team in the years ahead. We’re all greatly looking forward to working with him," he added.

Reflecting on his appointment, Ancelotti said that he is thrilled at the prospect of being able to work with the club with a rich history and a very passionate fan base.

“This is a great club with a rich history and a very passionate fan base. There is a clear vision from the Owner and the Board to deliver success and trophies. That is something that appeals to me as a manager and I am thrilled at the prospect of being able to work with everybody at the Club to help make that vision a reality," he said.

After serving as the manager of Milan for eight long years, Ancelotti joined Chelsea in 2009 and guided the club to Community Sheild glory, 2010 Premier League title and FA Cup double in his first campaign in English football. In 2011, the 60-year-old joined French club Paris Saint-Germain (PSG) and ended their 19-year-long wait for a Ligue 1 title in the 2012-13 season.

Ancelotti also guided Real Madrid to Champions League triumph in 2014 to become only the third manager to clinch Europe’s greatest club prize with two different teams. In 2016, Ancelotti succeeded Pep Guardiola at Bayern Munich and guided the club to Bundesliga title with a win over RB Leipzig.

The former Italian footballer also served as the manager of Napoli from May 2018 to December this year. His first assignment in the role will be Everton's Premier League clash against Burnley on Boxing Day (December 26) at Goodison Park.