FC Barcelona's 8-2 rout at the hands of Bayern Munich in the Champions League Quarter-final was one of the darkest night's in the Catalan side's history. This was the club's biggest loss since 1940. 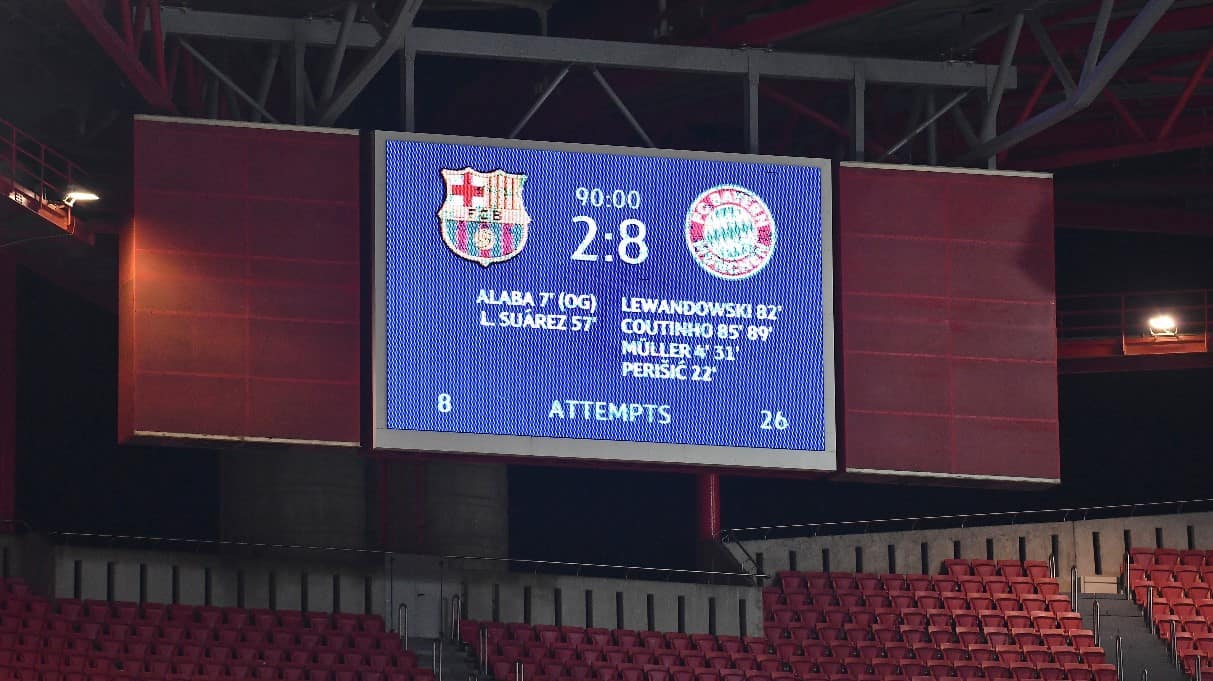 The 8-2 drubbing by Bayern Munich in their Champions League quarter-final on Friday was one of Barcelona`s worst five defeats in a single match. Here’s a look at FC Barcelona’s biggest defeats in history.

Barcelona took a 10th-minute lead only to fall apart as Sevilla scored all their goals in the space of an hour, between the 23rd and 83rd minutes to inflict the heaviest defeat on Barcelona in any competition.
Oddly enough, Barcelona finished fourth in the 1940-41 La Liga season, ahead of Sevilla who were fifth.

Fernando Sanudo racked up four goals for Real Madrid, the most a single player has ever scored when the two sides met, while Jaime Lazcano added a hat-trick.
Regueiro chipped in with another as Real celebrated the biggest win either side has claimed when playing each other in any competition.

Barcelona`s heaviest defeat in European competition in a single match did not look on the cards when David Alaba`s own goal cancelled out Thomas Mueller`s fourth-minute opener for Bayern in their Champions League last-eight clash in Lisbon.

But Barcelona`s ageing side were torn to pieces by an effervescent Bayern who scored almost at will after Croatia winger Ivan Perisic restored their lead.
The German champions led 4-1 at halftime and after Luis Suarez had pulled one back, they overran the Catalan side as substitute Philippe Coutinho, on loan at Bayern from Barcelona, scored two late goals.

The match bore a striking resemblance to Bayern`s 7-0 aggregate rout of Barcelona in the 2013 Champions League semi-final, when the German side won the first leg at home 4-0 followed by a 3-0 victory at the Nou Camp.

Barcelona looked poised to reach the final of Europe`s premier club competition after winning the first leg at home 3-0 only to suffer an astonishing reverse at Anfield in the return fixture.

Liverpool, who were missing prolific forwards Mohamed Salah and Roberto Firmino in the return leg, produced a fantastic performance roared on by a fervent home crowd.
Striker Divock Origi gave Liverpool a seventh-minute lead on the night and completed the memorable comeback in the 79th after substitute Georginio Wijnaldum scored a quickfire brace early in the second half.

Boasting the likes of Brazil striker Romario, Dutch defender Ronald Koeman and midfielder Pep Guardiola who went on to become the club`s trophy-laden coach, Barcelona headed into the final as favourites against the Italian side.

But AC Milan stunned their opponents with lethal counter-attacking which resulted in forward Daniele Massaro firing them into a 2-0 first-half lead.

Montenegrin Dejan Savicevic effectively killed the match as a contest with a delightful lob from the edge of the area in the 47th minute before France enforcer Marcel Desailly put the icing on the cake in the 58th.