With the team having a long injury list that has the likes of Pintu Mahata, Sukhdev Singh and the latest being Sourav Das, the return of Norde will be a big relief for the team who have won only one from six matches at home. 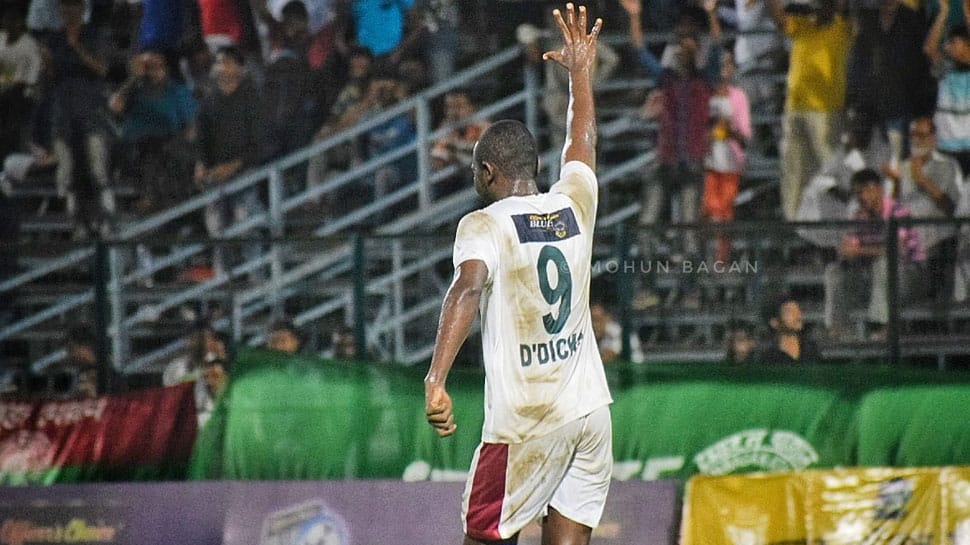 Former champions Mohun Bagan will be bolstered by the return of a fit-again Sony Norde when they face a spirited Real Kashmir FC in their I-League fixture on Sunday.

Having missed a fourth consecutive match for his muscle injury, the I-League winning star Haitian forward was seen training in full flow and was named in the 18-member squad.

Overcoming their derby loss, Mohun Bagan won back-to-back matches against Minerva and Shillong Lajong FC but only to falter against Neroca FC in their previous encounter to slip to the sixth position on the table.

"Sony is fit now and will be in the 18-man squad. Our target is to get three points at any cost," coach Shankarlal Chakraborty told reporters on the eve of the match.

With the team having a long injury list that has the likes of Pintu Mahata, Sukhdev Singh and the latest being Sourav Das, the return of Norde will be a big relief for the team who have won only one from six matches at home.

With Norde back, the Mohun Bagan coach may look to bench last season's leading scorer Aser Dipanda, while giving a central role to Henry Kisseka. In the first leg, Real Kashmir lost to Mohun Bagan by a solitary goal and since then the debutants are on an unbeaten run from six matches.

"The first leg match was different. It was a different ground, different conditions. Currently, they are ahead of us so we have to focus on the game," the Mohun Bagan coach said.

"I have told everyone to forget about what we did in the first phase. We have to focus on the second leg. Currently, we are concentrating on the Real Kashmir game."

"Real Kashmir are a good side, they are in good form at the moment and are very consistent. They have very good foreign players. The Indian players are also supporting them. We have to be very cautious against them. They did well against EB too."

Away from home for three matches, Real Kashmir have scored five points which includes a win over leaders Chennai City to remain in title contention. In the standings, the David Robertson-coached side lies in third place with a six-point deficit against leaders Chennai City who have played one match extra.

They played their last match at the Saltlake Stadium when they held East Bengal 1-1 on December 28 and since then they stayed back in Kolkata, utilising the break to acclimatise to the conditions which could come as a big bonus.

"It's good to be here. Halfway into the season, this is the longest gap we had. We have all enjoyed," Robertson said.

Asked about their first-leg defeat, he said: "We did our bits. But it's a different ball game playing here in a bigger ground. We have done well against EB hopefully my players will do well against Mohun Bagan."

Robertson further said the pressure would be on the home side Mohun Bagan who lost their last match.

"MB lost the last game, so there is, of course, a lot of pressure. Playing in front of home crowd so many fans is difficult. They have not been great at home."

The Kashmir outfit will also be boosted by the return of their key defender Mason Robertson who missed against East Bengal due to food poisoning.

With Mason in the backline along with captain Loveday Enyinnaya, it will be an interesting challenge against the star Mohun Bagan winger Norde.

They may be in the midst of a dream run in their debut season but coach Robertson said: "We have to be realistic."

Robertson said the first goal will to save relegation.

"The expectations increased after the first leg. But my first target is to save relegation. We are a new club and playing against big teams. We want to finish as high as we can," he said.

"We know we won't win the league. It's a great honour to play against teams like MB and EB -- the results of which would determine where we would finish."