Serie A: Robin Olsen's heroics help Roma to a 2-1 win over Bologna

Olsen did well to tip over Roberto Soriano's long-range drive in the eighth minute and blocked another effort from the same player. 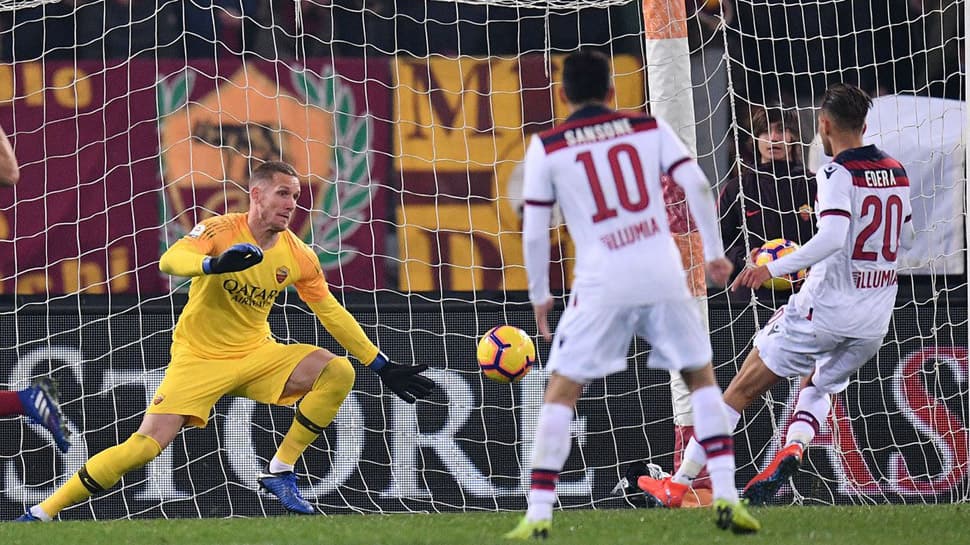 AS Roma had goalkeeper Robin Olsen to thank for a 2-1 win over lowly Bologna on Tuesday, which kept them hot on the heels of AC Milan in the race for the Champions League next season.

Aleksandar Kolarov, with a penalty and Federico Fazio scored for Roma in the second half, before a late Bologna consolation, but it was the Swedish keeper who was the real hero.

Olsen did well to tip over Roberto Soriano's long-range drive in the eighth minute and blocked another effort from the same player, with his feet in the 36th minute as Sinisa Mihajlovic's Bologna side took control.

The Swede then blocked Simone Edera's effort form close range, before Soriano blasted against the crossbar seconds before halftime.

Roma went ahead against the run of play in the 55th minute, Kolarov firing home the penalty after a foul on substitute Stephan El Shaarawy and Fazio volleyed the second with 17 minutes left following a corner.

Nicola Sansone pulled one back with an individual effort but Roma held out and moved up to fifth with 41 points, one behind AC Milan who are in the fourth and last Champions League qualification slot.

Bologna, 18th in the 20-team table, stayed in the relegation zone with 18 points, three adrift of Empoli.

Bundesliga: Dortmund slip up again with a draw against bottom club Nuremberg