Taking precautionary measures, the state government ordered the closure of all schools and colleges in Vadodara till Friday. 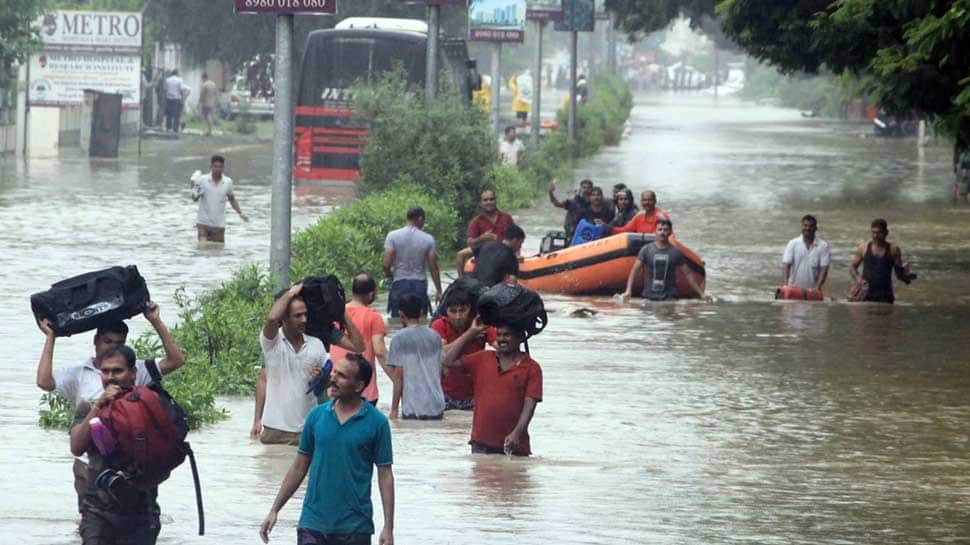 GANDHINAGAR: Torrential rains lashed Vadodara city and its adjoining areas in central Gujarat, creating a flood-like situation and throwing normal life completely out of gear on Thursday. At least seven people died in various rain-related incidents and more than 1,000 people were rescued in Vadodara and nearby cities after a record rainfall which continued since Wednesday.

The National Disaster Response Force (NDRF), fire brigade and Army evacuated around 1,000 people from the city and surrounding villages using boats and tractors and shifted them to safer places.

Adding to the woes, the water of the Vishwamitri river, which passes through Vadodara, entered low-lying areas of the city after Ajwa dam overflowed, which prompted the authorities to evacuate people living in these areas to safer places.

More than 100 people were rescued from the swirling waters of the Vishwamitri river from Bhayli suburb in Vadodara, according to the State Emergency Operations Centre (SEOC).

In the wake of the situation, Gujarat Chief Minister Vijay Rupani held a high-level meeting in Gandhinagar on Thursday to review the situation and the relief and rescue operations being carried out by various state and central agencies.

The CM had earlier deputed two IAS officers to provide guidance to the local administration. Train services were severely hit and the airport remained shut in Vadodara.

Taking precautionary measures, the state government ordered the closure of all schools and colleges in Vadodara till Friday. The Vadodara District Collector issued instructions to keep all municipal, government and private schools closed following the heavy rains.

Since Wednesday, the Vadodara city registered as much as 10.5 inches of rainfall, while the rest of the state also saw ''heavy to very heavy'' showers.

Talking to media after the emergency review meeting, Rupani said, ''We had a review meeting today in which we have decided to send five more National Disaster Response Force (NDRF) teams to Vadodara. Meanwhile, we have installed pumps to reduce the water level and around 4500 people have been shifted to a safer area."

Gujarat CM Shri @vijayrupanibjp briefs media on the latest post-rain situation and the ongoing relief and rescue measures to restore normalcy in Vadodara city as soon as possible pic.twitter.com/zg5qcok13U

Rupani confirmed the death of four people after a wall collapsed due to heavy rainfall in Vadodara. However, reports later said that at least seven people have died due to rain-related incidents in the state.

The Chief Minister also made an appeal to citizens to shift from low lying areas to safer places.

"Reached State Emergency Operation Center, Gandhinagar, and held a review meeting with officials on heavy rain situation in Vadodara. Instructed officials to leave no stone unturned to counter any adverse situation," the Chief Minister had tweeted after the meeting.

As local residents in Vadodara tried to cope up with the situation, crocodiles were spotted swimming in flooded streets of the city after which the Forest Department swung into action and captured them.

Videos shared by several users on Twitter suggested that crocodiles might have entered the urban areas due to flooding in the city. Moreover, 106 roads were closed in the city since Wednesday, out of which movement on 24 roads remained completely stalled.

The torrential downpour created water clogging in Char Darwaja, Fatehpura, Waghodia Road, Soma Lake and other parts of the city and resulting in a traffic jam, stretching a kilometre long in the western areas of the city. Electricity lines were damaged in some areas, leading to a blackout. The fire brigade rescue teams and administration swung into action to resolve the issues.

The National Disaster Response Force deployed three rescue teams in the Vadodara region and there were reports of more NDRF team arriving in the city to help those stranded due to incessant rains in Vadodara and adjoining areas.

Meanwhile, the Indian Meteorological Department has predicted heavy to very heavy rainfall at isolated places over Gujarat on August 2 and 3 which may hamper the relief work.

"Strong winds, speed reaching 40-50 km, are likely to prevail over along and off Gujarat-Maharashtra-Goa coasts. Fishermen have been advised not to venture into these areas," the government weather forecaster said.