7 dead due to incessant rains in Vadodara; schools, colleges closed till Friday

Gujarat CM Vijay Rupani held a high-level meeting on the 'heavy rain situation' and instructed officials to leave no stone unturned to counter any adverse situation.

VADODARA: Torrential rains lashed Vadodara city and its adjoining areas in central Gujarat, creating a flood-like situation and throwing normal life completely out of gear on Thursday. At least seven people died in various rain-related incidents and more than 1,000 people were rescued in Vadodara and nearby cities after a record rainfall which continued since Wednesday.

The National Disaster Response Force (NDRF), fire brigade and Army evacuated around 1,000 people from the city and surrounding villages using boats and tractors and shifted them to safer places. Adding to the woes, the water of the Vishwamitri river, which passes through Vadodara, entered low-lying areas of the city after Ajwa dam overflowed, which prompted the authorities to evacuate people living in these areas to safer places.

More than 100 people were rescued from the swirling waters of the Vishwamitri river from Bhayli suburb in Vadodara, according to the State Emergency Operations Centre (SEOC). In the wake of the situation, Gujarat Chief Minister Vijay Rupani held a high-level meeting in Gandhinagar on Thursday to review the situation and the relief and rescue operations being carried out by various state and central agencies.

Here are the live updates from Vadodara:

* Five additional teams of NDRF will arrive in Vadodara from Pune tonight.

*Vadodara civic officials are conducting a survey of the city.

* Water has not subsided in parts of Vadodara city which has witnessed a flood-like situation.

* Water in Vishwamitri river still flowing above the danger mark.

* Vadodara Collector Shalini Agarwal has ordered the closure of schools and colleges in the city till Friday.

* At least seven people have died due to rain-related incidents in Vadodara and adjoining areas.

* A large number of crocodiles have entered the city, creating havoc. In some videos shared by Twitter users, crocodiles can be seen floating in water-flooded streets of Vadodara.

* The Madhya Gujarat Vij Corporation Ltd has shut 48 power feeders across the city since late Wednesday evening as a preventive measure.

* NDRF, fire brigade, Army have evacuated around 1,000 people from the city and surrounding villages using boats and tractors, and shifted them to safer places, a government official said.

* Gujarat's biggest fertiliser plant Gujarat State Fertilizers & Chemicals Ltd. (GSFC) shut down due to incessant rains and waterlogging. Plant's power panel switch room is submerged in water up to knee-length. The plant has not been operating since Wednesday. It is one of the biggest fertiliser plants in Gujarat, producing thousands of tonnes of fertilisers daily. 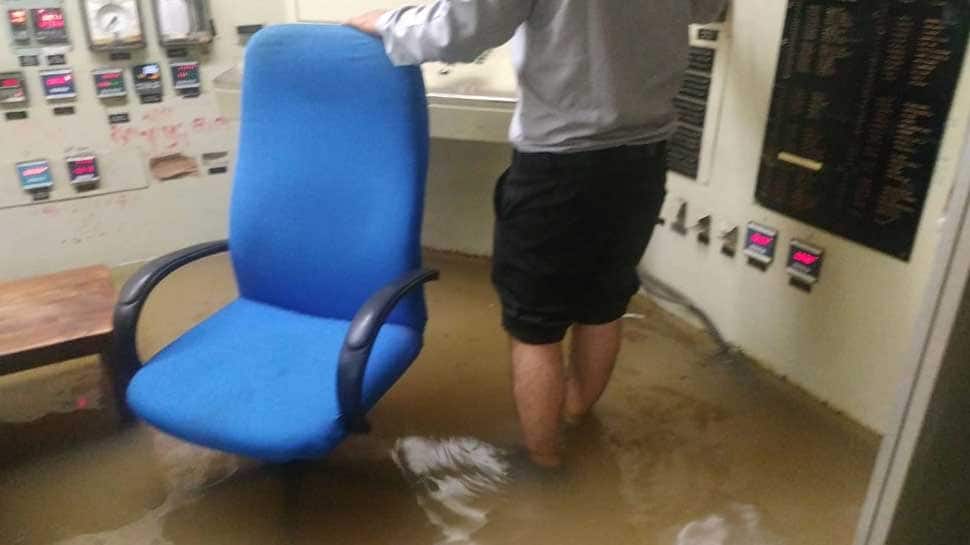 * Electric wires uprooted due to heavy rains at many locations in Vadodara. City's famous jeweller Mahesh Choksi dies due to electrocution at his residence.

* Operations at Vadodara Airport have been halted till 3 PM due to waterlogging and garbage accumulation on the runway.

* Here are some visuals of the emergency meeting held by Gujarat CM Vijay in view of incessant rains in Vadodara and adjoining areas.

*Due to waterlogging in Vadodara and adjacent areas,  trains 59549 Vadodara-Ahmedabad passenger and 69114 Ahmedabad-Vadodara passenger cancelled.

*Vadodara railway station shut down and over 22 trains canceled. Two flights were diverted to Ahmedabad due to waterlogging. Indian Meteorological Department has predicted heavy to very heavy rainfall at isolated places over Gujarat.

*All schools and colleges have been ordered to remain shut on August 1.

*"Strong winds, speed reaching 40-50 kmph, are likely to prevail over along and off Gujarat-Maharashtra-Goa coasts. Fishermen are advised not to venture into these areas," the weather department said.

*Torrential rains pounded Vadodara and nearby areas creating a flood-like situation since Wednesday. People are being shifted from low lying areas to safer places, a statement from the Chief Minister`s Office read.