Children should not consume soda, sweetened beverages, pizza and salty food, biscuits, yogurt regualrly as they are not good for health. 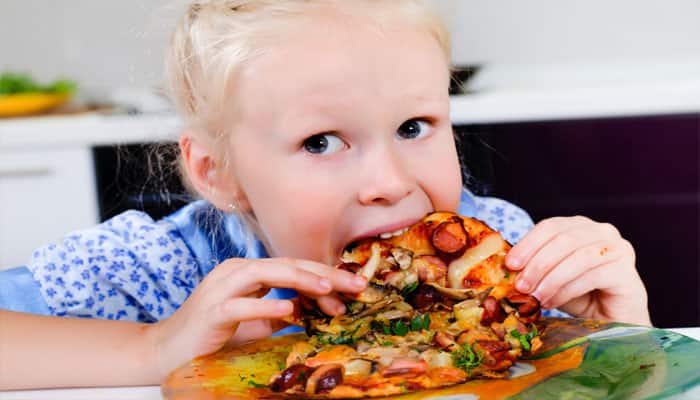 London: Children should not consume soda, sweetened beverages, pizza and salty food, biscuits, yogurt regularly as they are not good for health.

A new study has revealed that kids who consume these foods regularly increases the risk of liver disease in them.

Both uric acid concentration and fructose consumption may be high in individuals with non-alcoholic fatty liver disease (NAFLD) -- a condition where extra fat is accumulated in liver cells in people who drink little or no alcohol.

It is estimated to affect up to 30 per cent of the general population in Western countries and up to 9.6 per cent of all children and 38 per cent of obese children across a spectrum of liver disease, including NASH (defined as steatosis, hepatocyte ballooning and inflammation).

Although NASH is a less aggressive form of NAFLD, it can progress to severe fibrosis and cirrhosis, with development of hepatocellular carcinoma in adults.

The study suggested that fructose consumption was independently associated with high uric acid, which occurred more frequently in patients with NASH than in not-NASH patients.

Valerio Nobili from Bambino Gesu Hospital in Italy said, "It is plausible that dietary fructose intake and uric acid concentrations are potential risk factors for liver disease progression in NAFLD".

Nobili added, "The study shows for the first time that uric acid concentrations and dietary fructose consumption are independently and positively associated with NASH,"

According to the findings, reported in the Journal of Hepatology, the team analysed 271 obese children and adolescents with NAFLD -- 155 males, mean age 12.5 years -- who underwent liver biopsy.

Nearly 90 per cent were found drinking sodas and soft drinks one or more times a week. Almost 95 per cent of patients regularly consumed morning and afternoon snacks consisting of crackers, pizza and salty food, biscuits, yogurt, or other snacks.

The development of NASH may markedly affect life expectancy and quality of life in affected individuals.

Thus, "it is crucial to understand the risk factors for NASH in children and adolescents in order to design effective interventions," Nobili said.

This is how you can get rid of those extra pounds on your thighs!