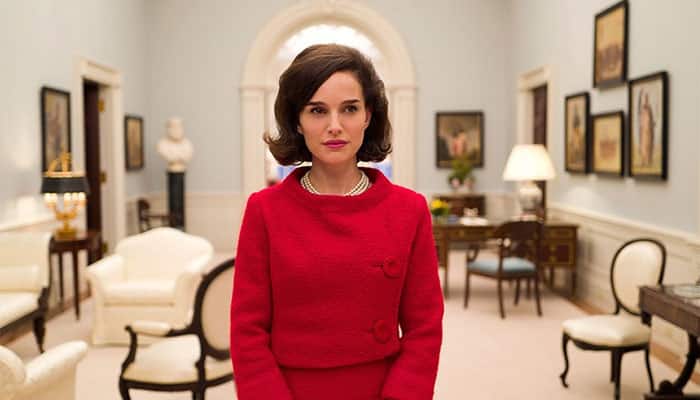 When it comes to biopics, there is a very thin line dividing a homage from mimicry. The very beautiful and skilled Natalie Portman pulls off the fears, insecurities , anxieties, sorrows and the overpowering elegance of the iconic Jacqueline Kennedy after her husband the legendary John F Kennedy was gunned down.

Those tricky four days after the ghastly tragedy when the US and its allies held their breath, must have been terribly trying times for the President's glamorous widow.

Portman as Jackie never stops looking glamorous even as she grieves for not just her beloved husband but all the perks that came with being the First Lady. Her interactions with her brother-in-law Bob Kennedy (Peter Sarsgaard) and her closest confidante in the White House Nancy Tuckerman (Greta Gerwig) fulfil the portrait of an incomplete woman.

Chilean director Pablo Larrain doesn't allow his heroine to enjoy her tragic role. There is a sense of holding back, of reining-in her emotions even when they threaten to spill over. This restraint, I felt, came in equal measures from how the real Jackie Kennedy was and the way Larrain has elected to have her played by Portman.

There are several occasions when you feel the screen could erupt into a cathartic cry of bereavement.

Even when the beautiful Mrs Kennedy is shown alone in her bedroom (drinking and contemplating a life ahead of solitude) or with her heartbreakingly young children telling them that daddy won't come home again, the narrative mood -- pinned down by a harsh emotion-less background score -- remains dispassionate and withdrawn, as though it (the narrative) wouldn't really dare to go beneath that immaculate mask of the chic First Lady who wouldn't stop being the President's wife even when he is dead.

The narrative has Jackie doing confessionals with two attentive characters -- a journalist (played by Billy Crudup) and a priest (John Hurt, in his farewell performance). In both the conversations, we see Jackie Kennedy playing the role of the grieving First Lady.

Natalie Portman pulls off the emotional austerity well but fumbles with the Jackie twang and accent. And that constant lip and mouth movement is quite distracting. It is a skilled and an accomplished performance. But not a great one. Likewise, the film leaves us underwhelmed. Jackie Kennedy was too proper in her conduct to let anyone (including probably herself) know her true feelings.

Instead of probing, the film plays along with her. And that's a tragedy beyond the one we see Jackie Kennedy grappling so suavely with.

CBFC refuses to certify Prakash Jha's 'Lipstick Under My Burkha'