Agenda behind religious conversion, politics and demand for stringent law

The investigation being carried out by the police in several states has revealed that the Hindu women have become soft targets in 'Jihad' for religious conversion and the people behind this racket mostly target those belonging to poor families, unemployed youth, or people with a physical disability. 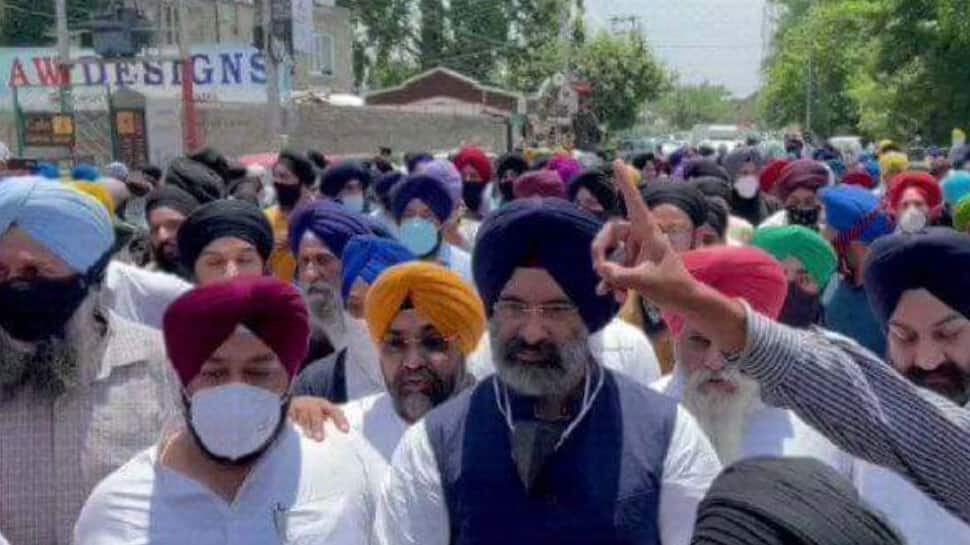 Jammu: At a time when the Narendra Modi-led NDA government is taking steps towards restoring the statehood of Jammu and Kashmir, the alleged forced religious conversion of two Sikh girls has sparked widespread protests and raised concerns about the security of minorities in the newly-created UT.

The issue has now snowballed into a major political controversy and appears to have divided the political class, with some demanding a stringent law against forced religious conversion like in UP and other BJP-ruled states, while others maintaining a stoic silence fearing loss of their vote bank.

The investigation being carried out by the police in several states has revealed that the Hindu girls or women have become soft targets in 'Jihad' for religious conversion and the people behind this racket mostly target those belonging to poor families, unemployed youth, or people with a physical disability.

The latest incident came to light after protests broke out in Kashmir over the weekend after the reports about the alleged forced religious conversion of two Sikh girls surfaced. It was reported that the Sikh girls were allegedly kidnapped, forcibly converted and married off without the consent of their families.

One of the girls, an 18-year-old allegedly mentally unstable, was forced to perform ‘nikaah’ with a married man aged 62. The Sik leaders claimed that their marriage was validated by a local court, without the consent of the girl’s parents. The second girl allegedly went missing after attending an event with a friend.

The recent incident has exposed a pattern of ethnic cleansing of minorities in J&K decades after the forced migration of Kashmiri Pandits. The incident also exposes the hidden agenda of Pakistan-backed anti-India elements to force conversion to Islam from Kerala to Kashmir.

The issue has sparked tension since the Muslim leadership in J&K is on the defensive mode and the mainstream non-BJP parties like Samajwadi Party, BSP, Congress and AAP have given a lukewarm or delayed response to the forced conversion of two Sikh girls in J&K.

The Sikh community, including the Akal Takht and Shiromani Akali Dal, has taken the matter very seriously and demanded safety measures in the Kashmir Valley for the protection of minorities. The SAD – Punjab’s former ruling party – has called for the imposition of anti-conversion laws by the Centre in J&K.

SAD leader Manjinder Sirsa, who has been leading the protests, demanded that the girls be returned to their families. He said that a high-level Sikh delegation will meet to discuss minority concerns in Jammu and Kashmir. As protest over the issue intensified, Lieutenant Governor of J&K Manoj Sinha also took cognisance of the matter of girls’ safety and assured that a stringent law against forced religious conversion will be introduced soon.

The influential Akal Takht has also come forward with the demand for an anti-conversion law in Jammu and Kashmir, in line with the similar legislation in Uttar Pradesh and Madhya Pradesh. Some Kashmiri Pandit organisations also demanded severe punishment for the culprits and the return of the "abducted" Sikh women to their families.

However, this issue has a different political connotation too. During the 2020 protests against the new citizenship law, several Sikh bodies had supported the protesting Muslim community, especially women who staged a month-long sit at Shaheen Bagh against the Centre.

At that time a political narrative suggesting that the members of two religious minority communities in India - Muslims and the Sikhs – should stick together against a fascist BJP regime at the Centre was strongly built.

But all that now stands exposed as hollow and the Sikh-Muslim bonhomie build over the anti-CAA protest has vanished now. After staying mum initially, the PAGD leaders in J&K have now realised that the incident will create a wedge between the Sikhs and Muslims and cause irreparable harm to Jammu and Kashmir.

The local J&K leaders have said that the two communities (Muslims and Sikhs) have supported each other through thick and thin, having withstood countless attempts to damage age-old relationships, and that vthey should stand together this tie too.

However, this incident also points to a larger sinister plot to terrorise the local Hindus and Sikhs in J&K and force them to embrace Islam by the Pakistan-funded terror groups like Hizbul Mujahideen and LeT.

The National Investigating Agency (NIA) has recently revealed how Hizbul is creating terror to force Hindus exodus from Kashmir. A charge-sheet filed by NIA outlined Hizbul’s plan to revive terrorism in Doda, Kishtwar, Ramban and other districts of Kashmir by carrying out targeted killings of Hindus in the area.

Among the mainstream political players, BJP is the only political party that has strongly opposed forced conversions on religious lines. Several BJP-ruled states have passed powerful legislation against forceful conversions and marriages and making them cognizable and non-bailable offences.

These laws intend to counter alleged attempts to convert Hindu women to Islam in the guise of marriage, which right-wing Hindu activists refer to as 'love jihad'. However, such laws are not new in India. These have been in existence in several states, the first such being enacted in 1967 in Odisha with the aim of stopping conversions of tribal people by Christian missionaries.

In the backdrop of love jihad cases, a document prepared by the BJP had identified ‘forced’ religious conversion and NGOs that receive foreign funds as internal threats the nation faces. The BJP document categorised religious conversion as a “serious domestic threat” and a “conspiracy” by Christian and ‘Jihadi’ activities to disturb the demographic structure of the country with the help from funds and force.

While the Opposition parties have always blamed BJP's  "communal plank", it is heart-warming to see SAD and Sikh bodies coming out in the open to oppose the incidents of forced religious conversions.

For the restoration of J&K’s statehood, it is important that all including the minorities are provided with a terror-free atmosphere and no party encourages such coercive activities. The growing cases of forced religious conversions validate the demand for legislation that strongly deals with religious conversion “through allurement, force or by misrepresentation or by any other fraudulent means”.