MBS will be meeting PM Modi at Hyderabad House for bilateral talks. 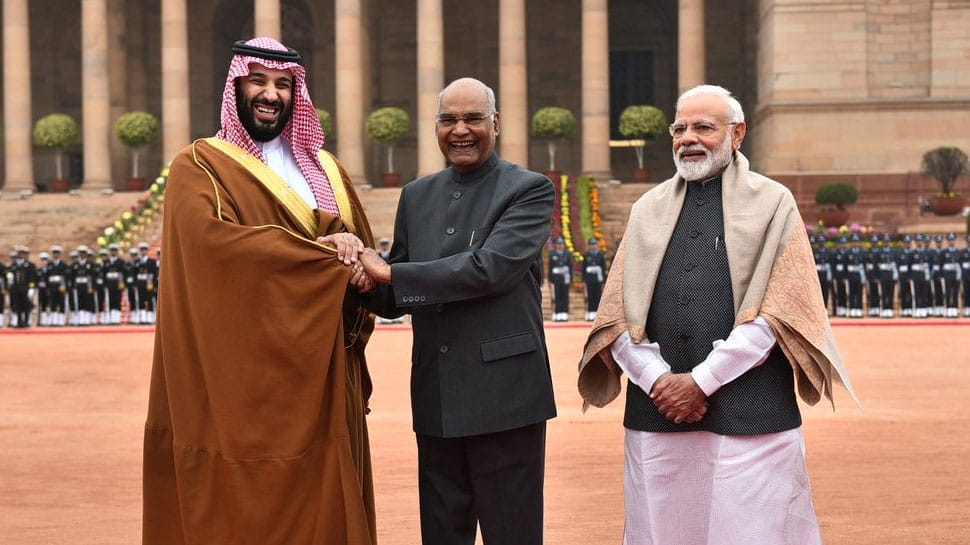 NEW DELHI: Saudi Arabia's Crown Prince Mohammed bin Salman bin Abdulaziz Al-Saud, who is on an official visit to India, has hailed the bilateral ties between the two countries and lauded the role of Indians in building the Saudi Kingdom.

Standing alongside President Ram Nath Kovind and Prime Minister Narendra Modi, the Saudi leader added, "Today, we want to be sure this relation is maintained and improved for the sake of both countries. With the leadership of President and PM, I am are sure we can create good things for India and Saudi Arabia."

Highlighting the role of the Indian diaspora in building the country, the Saudi Crown Prince said, "Since we remember ourselves, Indian people are friends and part of building Saudi Arabia in the past 70 years. A lot of Saudis work and develop a lot of things in India for hundreds of years."

He will now be meeting PM Modi at Hyderabad House for bilateral talks.

This will be the second meeting between Prime Minister Modi and the Saudi Crown Prince in the last three months. The two leaders last met on the sidelines of G20 Summit in Argentina on 30th November.

Both sides are expected to sign five MoUs/ Agreements in areas of investment, tourism, housing and information and broadcasting.

Saudi Arabian Crown Prince Mohammed bin Salman, who is also famously known by his initials MBS, arrived in India on Tuesday evening and was received by PM Narendra Modi who broke the protocol to receive him.

The long shadow of the Pulwama terror attack - the deadliest in India in over two decades - will be dominating the talks with a focus on making sure that Pakistan acts on terror infrastructure it has been supporting on its territory.

New Delhi will be calling on Riyadh to mount pressure on its traditional ally Pakistan. Pakistan based terror group Jaish-e-Mohammed has claimed responsibility for the attack.

Saudi Arabia has strongly condemned the suicide attack on the CRPF convoy in J&K's Pulwama on February 14.

MBS had come to India, a day after his two-day visit to Pakistan.

It is interesting to note that the Saudi Crown Prince went back to Riyadh after his Pakistan visit concluded, and came back again to New Delhi, a development which many will see as a de-hyphenation by Saudi Arabia between Pakistan and India and something which New Delhi will prefer in the aftermath of Pulwama terror attack.

During Saudi Crown Prince's Pakistan visit, he announced a USD 20 billion investment. Reacting to the development, sources in Delhi said, "When they invest in India, they invest in a robust economy, in Pakistan they bailout"

India is one of the eight strategic partners of Saudi Arabia with which the West Asian country intends to deepen partnership in areas of political, security, trade and investment and culture.

Both countries are finalising the setting up of ‘Strategic Partnership Council’ at the Ministerial level.

Bilateral trade between both the countries stood at USD 27.48 billion in the financial year 2017-18. Saudi Arabia is India's 4th largest trading partner with New Delhi getting 17% of its oil imports from the country.

Oil prices are something that India has been consistently raising with Saudi Arabia, an OPEC country. Saudi ARAMCO along with ADNOC of UAE in 2018 agreed to partner in Ratnagiri Refinery.

The country hosts 2.7 million strong Indian community, one of the largest in West Asia, sending remittance of over US$ 11 billion annually.

India is also in touch with the West Asian country when it comes to Afghan Peace process.

Prime Minister Modi had visited Riyadh in April 2016. Saudi Arabia's King Salman had honoured him then with the "Sash of King Abdulaziz", the highest civilian decoration awarded by the West Asian country.

Crown Prince Salman is Saudi Arabia's second-most important person after the King and his designated successor. Saudi Arabia is also one of the world's largest oil producers.