In the leaked conversation, Dubey demanded Rs 20 lakh loan from the politico and wanted him to arrange for his surrender. 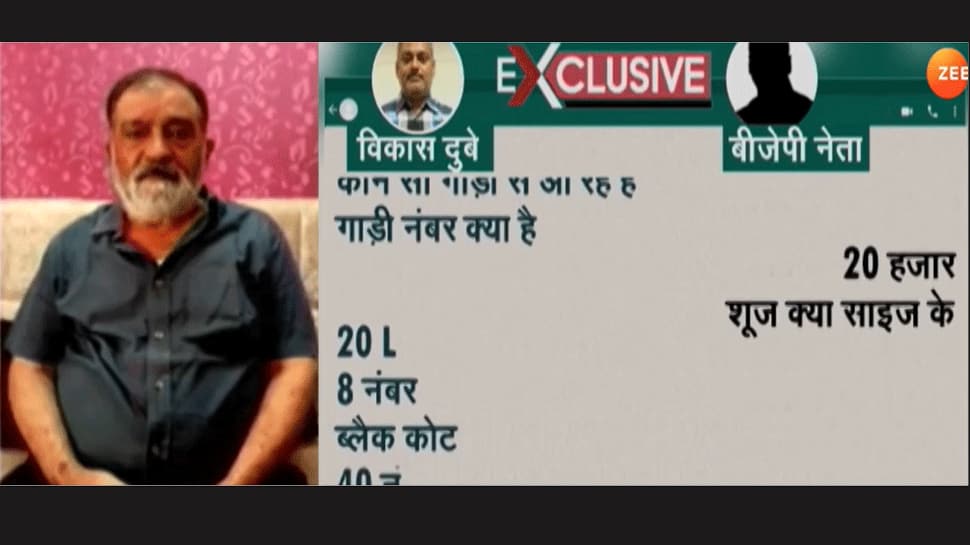 Kanpur: A purported WhatsApp conversation and audio clip of slain Kanpur gangster Vikas Dubey and BJP leader Subodh Tiwari has gone viral on social media. The gangster had approached the BJP leader after the shocking July 3 Kanpur ambush and sought Rs 20 lakh from him.

In the WhatsApp chats that has been circulated on social media, the dreaded gangster is seen asking the BJP leader to arrange Rs 20 lakh, few pairs of black coat and trousers along with shoes of his size, and arrange for his surrender. In return, the gangster promises to give the BJP leader land in Kanpur and vows to double the amount within 48 hours while also assuring him all help in return.

The gangster asked the leader to arrange four pairs of black coat and trousers (size 40) and black shoes (size number 8) for him. "I may appear the day after tomorrow," the gangster wrote in one of the chats, leading to opinion that he was planning to surrender himself before the court in the get-up of a lawyer.

The name of Samajwadi leader Irfan Solanki has also appeared in the case. Zee News, however, doesn't claim the authenticity of the WhatsApp conversation.

He said he doesn't confirm that the person on the other side of the conversation was Vikas Dubey. The BJP leader also expressed his fear for life for the chat conversation going viral on social media and requested security. "I had informed about Vikas Dubey's message on my WhatsApp to the STF and I cooperated with them completely so that the gangster gets arrested. I have no idea how the conversation got leaked and is now everywhere on the Internet. I fear for my life," he said.

The BJP leader said that he was in touch with the gangster for nearly 3 days, and claimed that he continued talking to the gangster at the behest of the police. He said that after a few days when police officials told him that nothing was coming out in the case, he had put the number on the blacklist.

On the other hand, SP leader Irfan Solanki too clarified about his role in connection with Vikas Dubey case and said he had nothing to do with the gangster nor have ever visited the Bikru village. He, however, admitted to having met BJP leader Subodh Tiwari. Solanki demanded an inquiry into the viral WhatsApp chat and accused BJP of falsely implicating him under a conspiracy.

Vikas Dubey was killed in an encounter on the morning of July 10 when he tried to escape from police custody after a police vehicle carrying him from Ujjain to Kanpur met with an accident. Prior to Dubey's encounter, five of his associates were killed in separate encounters.