At least 27 killed, over 55 lakh affected as flood waters inundate 29 districts of Assam

According to ASDMA, four people have lost their lives in Morigaon, two each in Sonitpur and Udalguri districts and one each in Kamrup (Metro) and Nagaon districts. 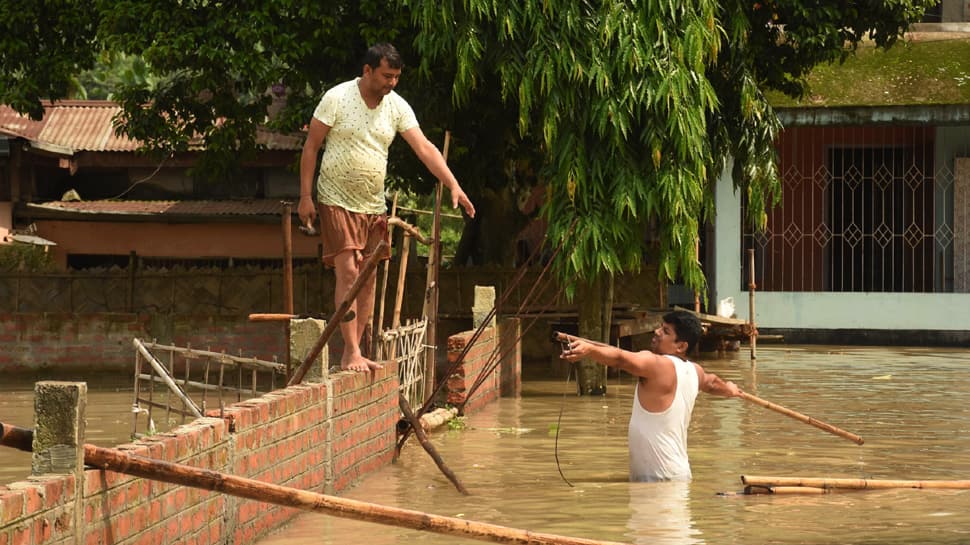 GUWAHATI: At least 27 people have died and over 55 lakh affected as flood situation remained grim in 29 districts of Assam on Wednesday. Assam State Disaster Management Authority (ASDMA) said in a bulletin that one rhinoceros has died in Kaziranga National Park due to floodwater. The bulletin added that Brahmaputra and its tributaries are still flowing above the danger mark in Guwahati and several other places in the state.

According to ASDMA, four people have lost their lives in Morigaon, two each in Sonitpur and Udalguri districts and one each in Kamrup (Metro) and Nagaon districts. ASDMA said that over 1.50 lakh people have been displaced from their homes due to flood. They displaced people have taken shelter in 427 relief camps and 392 relief distribution centres set up by state government in different districts of the state.

Vast areas of Kaziranga, Manas National Parks and Pobitora Wildlife Sanctuary were inundated due to flood waters, forcing rhinos and several other animals to run towards the highlands to save their lives.

The Brahmaputra river is flowing above the danger level in Jorhat, Tezpur, Guwahati, Goalpara and Dhubri along with rivers Burhidehing at Khowang in Dibrugarh district, Subansiri river at Badatighat in Lakhimpur, Dhansiri river at at Numaligarh in Golaghat district, Jia Bharali river at Sonitpur, Kopili river at Kampur and Dharamtul in Nagaon district. The ASDMA bulletin said that several roads have broken due to flood waters.

The Northeast Frontier Railway has slowed down trains in Abhayapuri-Jogighopa section as villagers from nearby areas have taken shelter in railway embankment to escape the fury of flood.

The chief public relations officer of Northeast Frontier Railway, Pranav Jyoti Sharma, said on Wednesday that many villagers have been taking shelter on the railway embankment in the Goalpara - Jogighopa section after their homes were destroyed by flood waters.