The counting of votes polled in 243 constituencies in the three-phased Bihar assembly election 2020 began on Tuesday under the watchful eyes of the Election Commission. 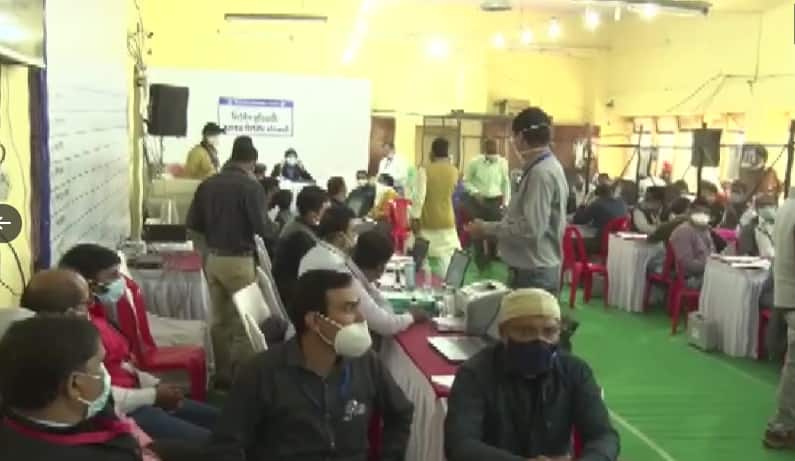 New Delhi: Although Tejashwi Yadav-led Grand Alliance has been leading in the initial trends of counting for the Bihar Assembly election 2020, the BJP-JDU alliance has gradually picked up pace after trailing in the early trends coming in.

The NDA is now inching ahead and has closed the gap with Tejashwi Yadav-led Grand Alliance a few hours after the counting of votes began at 55 centre across Bihar. The NDA is currently ahead in 107 seats, Mahagathbandhan is leading in 103 seats.

According to the EC trends for 104 of 243 seats, NDA is leading on 52 seats - BJP 28, JDU 20, Vikassheel Insaan Party 4; Mahagathbandhan is ahead on 46 seats - RJD 29, Congress 12, Left 5 BSP is leading on two seats, while Chirag Paswan's Lok Jan Shakti Party is ahead in merely three. Asaduddin Owaisi-led All India Majlis-E-Ittehadul Muslimeen (AIMIM), however, is ahead on one seat.

The counting of votes polled in 243 constituencies in the three-phased Bihar assembly election 2020 began early morning on Tuesday (November 10, 2020) under the watchful eyes of the Election Commission and amid strict COVID-19 safety protocols.

Earlier on November 7, the last day of polling, the majority of exit polls predicted a big win for Tejashwi Yadav-led Grand Alliance or Mahagathbandhan, comprising the Rashtriya Janata Dal (RJD), the Congress and the Left parties in the state.

If the predictions of the pollster come true, Tejashwi Yadav would be become the youngest chief minister any state in the country has had.

Most exit polls had predicted a rout for the ruling JD(U)-BJP combine and a resounding victory for the Grand Alliance (Mahagathbandhan) led by RJD's 31-year-old chief ministerial candidate Tejashwi Yadav.