The BJP on Saturday held a demonstration in Mumbai demanding an apology from Congress leader Rahul Gandhi for levelling 'baseless allegations' on PM Modi over Rafale deal. 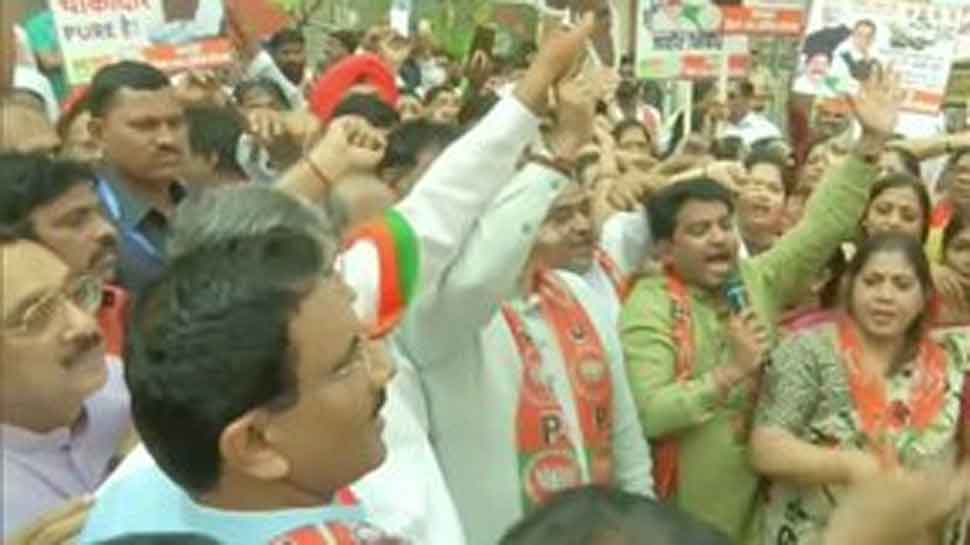 In Mumbai, the BJP workers assembled and shouted slogans against Rahul and Congress and asked the former party president to answer for his allegations on the Prime Minister.

In West Bengal capital city, the BJP workers tear and defaced Rahul's posters during a protest demanding his apology on the issue.

Earlier on Friday, the saffron party said it plans to hold a nationwide protest on November 16 with its cadres across India descending to streets and upping the ante against Congress. Rahul and the Congress party made the alleged Rafale scam the single largest electoral issue in run-up to the 2019 general election claiming the government indulged in alleged corruption in the procurement of the jet. Gandhi in his election rallies had gone to the extent of calling PM Modi a 'thief'.

On Thursday, the Supreme Court refused to review its earlier decision giving a clean chit to the Modi government in the Rafale deal and ruled, "We don't feel it necessary to order an FIR (First Information Report) or a roving inquiry into the case." The order was seen as vindication by the BJP government, which was repeatedly accused by the Congress of corruption in the Rs. 59,000-crore contract.

Attacking Congress over Rafale allegations, BJP's National General Secretary and party MP Bhupendra Yadav said, "A protest has already been launched in Delhi and it will be replicated across India on Saturday. The Congress has been lying through their teeth. A CAG report and now Supreme Court's verdict on review petition in government's favour shows how baseless the allegations were."

On the other hand, Union Minister Ravi Shankar Prasad raked up the Bofors ghost by claiming the Delhi High Court judgement that absolved former PM Rajeev Gandhi off Bofors scandal was 'questionable'.

Led by their Delhi unit chief Manoj Tiwari, BJP leaders and workers raised slogans against the Congress party and demanded an apology from it for trying to "malign the image" of Prime Minister Narendra Modi. The protesters tried to march towards the Congress head office on Akbar Road in Central Delhi but were detained by police and taken to a police station.